I have written extensively about Old Forester, one of America’s most ubiquitous Bourbon brands. It is the bourbon that was the foundation of Brown Forman, one of the largest whiskey conglomerates. Chris Morris serves as master distiller for both Old Forester and Woodford Reserve.

This year, Hokus Pokus has really upped its barrel picking game. This is the third of seven releases of single barrel Hokus Pokus bottlings this year. Many more surprises to come, some of which I helped instigate and in some cases tasted the samples. But I had nothing to do with this one. So I am ready to be surprised by this special bottling of Old Forester Single Barrel.

Weighing in at ninety proof, this is lower than say the Birthday Bourbon or Statesman releases but higher than regular Old Forester. Interestingly, the Single Barrel comes in the same nice bottles as the Whisky Row series. Color is dark amber with some mahogany. I suspect there is some real age on this given the proof. Beautiful oily legs.

The nose is mouth watering. Brown sugar, oak, slight rye spice. Very nice. On the palate is the reverse of the nose, rye spice takes over with the sweetness moving to the back seat, with a lot of oak on the finish. Very thick rich mouthfeel for such a low proof. Really has a ton of good flavor for the Proof too.

So, I decided to put it up against the Statesman release, which is 95 proof.

Luckily I had a little left. The nose on Statesman is a little flatter than the Single Barrel. So is the palate. It’s the same bourbon but the Hokus Pokus bottling is far more flavorful even at lower proof.

Ok, so how does it stack up against the 12 year old limited release $120 96 proof Birthday Bourbon release from last year? Well, the Single barrel stacked up so well against Statesman I had to find out. 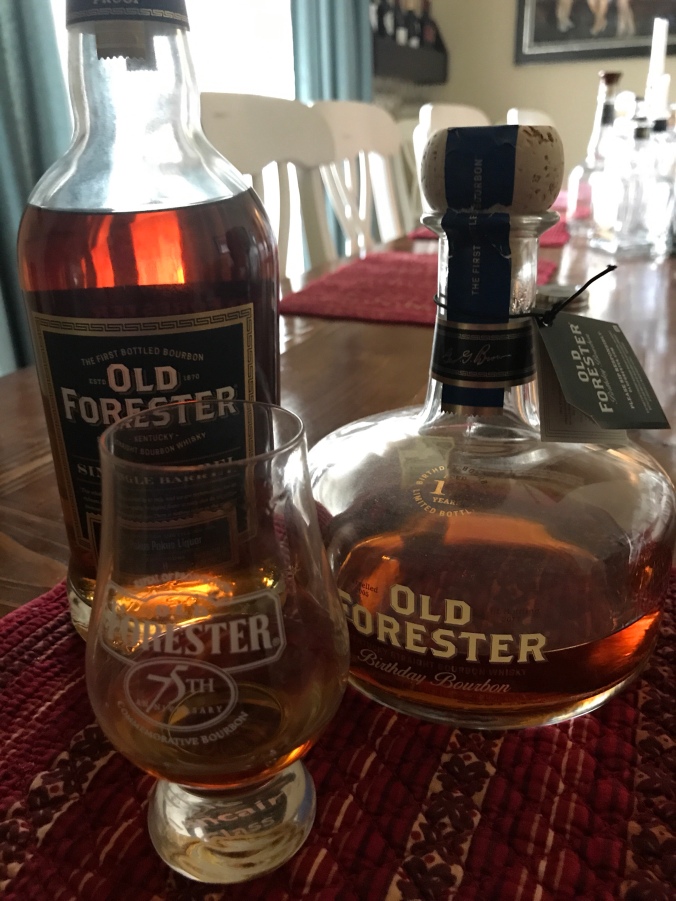 Birthday Bourbon’s nose is more subtle and complex. Same is true on the palate, but the Single Barrel has the same mouthfeel and more oak.

The Hokus Pokus Single Barrel is not as good as the Birthday Bourbon. But it’s competitive as hell with it. Surprisingly so. And as opposed to a few bottles, Hokus got a whole barrel.

True confession time now. When Hudson Funk at Hokus Pokus told me they were getting an Old Forester Barrel my initial reaction was why? I wouldn’t have thought that would be a thing compared to the Woodford Double Oaked Hokus Picks. Hokus is already getting top notch Brown Forman barrels that way. Why go there?

Why? Obviously Hudson, Gus Olah, and the rest of the Hokus Pokus crew tasted this and said sign me up. Having tasted it myself, sign me up too. I am going to go back and buy a few bottles for the bunker. It’s pretty special.