In 2008 Old Forester was one of my go to bourbons. Very reasonably priced so I often bought it by the handle. That year they came out with a 75th Anniversary of the repeal of prohibition gift set of a 100 proof Old Forester with a certificate and a Glencairn glass. 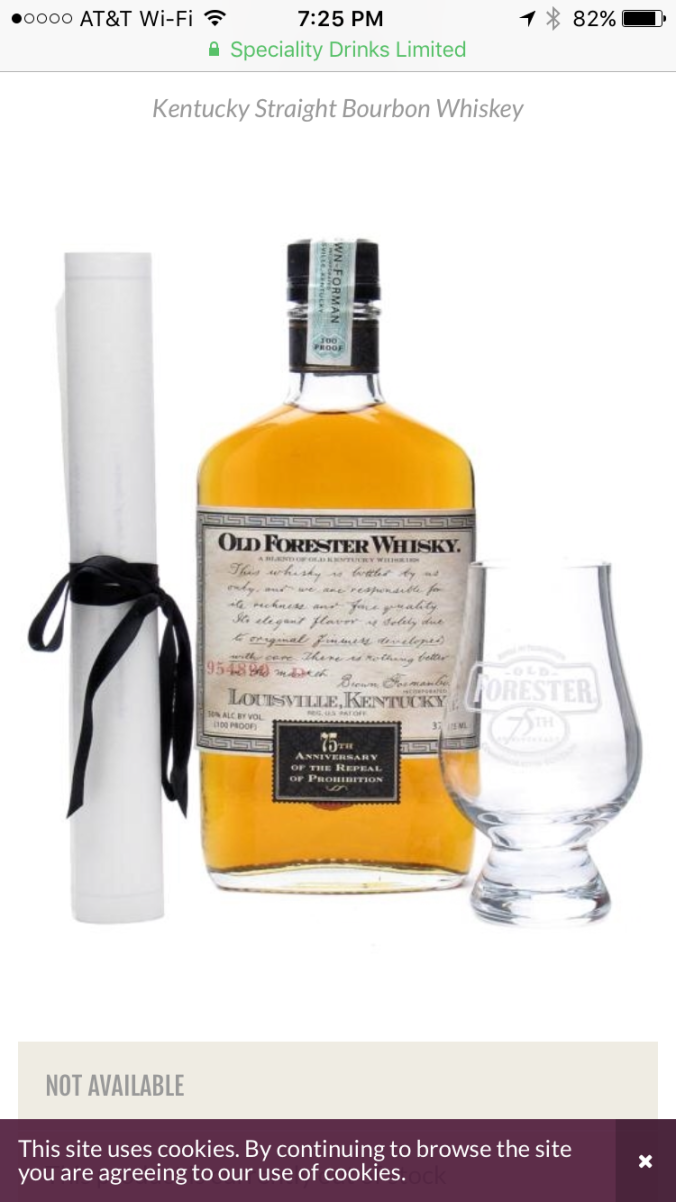 One of the interesting things about this bourbon was the whiskey only came in pints. It wasn’t just that this was a unique bottling; pints were the usual size of bottles for medicinal whiskey during prohibition. That’s when pint bottles of whiskey actually became a thing. So that was pretty neat. In any event, right after prohibition ended I imagine there were a lot of pint size bottles around until production of fifth bottles caught up with demand.

I thought I would keep it as a collectible but, as a sign of things to come, I drank it and lost the certificate. Out of approximately 80 different whiskies in my house, only three signed bottles are going to remain unopened. But I still have the glass, which was my first Glencairn whisky tasting glass.

Around that time though, I became familiar with Buffalo Trace and started buying their bourbons and kind of forgot about Old Forester, although Woodford Reserve has been a part of my bar at times. Both are Brown Forman products, and half of Woodford Reserve is potstilled in Woodford County and the other half column stilled in Louisville where Old Forester is made. Oh, and by the way they make Jack Daniel’s too- the whiskey of my misspent youth in Tennessee while at Sewanee. Jack Daniel’s was the first distillery I ever toured, in connection with my biology for liberal arts majors class.

As another aside, when I was at Sewanee there was a liquor store in Monteagle at Jim Oliver’s Smokehouse that had a sectioned box with a section for each fraternity at Sewanee. Members of the various fraternities would have the cashier place their receipts in the appropriate section of the box. Because of the strange nature of Tennessee law, you could only buy wine and hard liquor at the store; you had to go elsewhere to buy beer. So the contest was really to see which fraternity drank the most alcohol excluding beer. The fraternity with the most amount spent at the store during the academic year was rewarded in May with a case of Jack Daniels. I am proud and yet ashamed to say that Beta Theta Pi, my fraternity, won the case my freshman and sophomore year. After that I and my pledge class had to chill so we could graduate but never mind.

The other night I was out of town and at a hotel bar after dinner. Missing the comfort of a bourbon in my study, rather than ordering an after dinner drink I ordered Old Forester 1897 bottled in bond, the second in their whisky row collection. The hotel bar happened to have it and I was impressed they did.  I found it to be quite good, as I remembered that pint of repeal day 100 proof Bourbon to be.

So, today I decided to run by Hokus Pokus and pick up the Old Forester 1920 Whiskey Row bottle at 115 proof. This is the third of the Whiskey Row series. I love high proof bourbon and the bottle had been at the store for a while, and I had a new found interest in an old favorite.

This bourbon is really good. Beautiful mahogany color. Excellent nose that reminds me of pastries with raisins in them. Baking spice and raisins on the mouthfeel followed by oak and rye spice; oily but not syrupy. Finish is nice and lingers in the right ways. This is a damn fine bourbon I am glad I have on my bar.

But Brown Forman I have a bone to pick with you. You make and char your own barrels which no other distiller does anymore. You know how to make really good bourbon with oak notes and toasted sugars and baking spices. You’ve hit two home runs lately in my book; the Old Forester 1920 and Woodford Reserve Double Oaked. Just absolutely excellent bourbons. However, even though the 1920 is 115 proof and excellent, when are you going to put out a cask strength unfiltered bourbon so we can really taste the art of your bourbon making?  It’s like you are afraid it is going to suck. I just want to say I really think you can do it!  Buffalo Trace, Heaven Hill, Jim Beam (inclusive of Maker’s), Wild Turkey, Willett, and even Bulleit (Diageo) all put out Cask Strength unfiltered bourbons that are all amazing.

Comon’ Brown Forman. Bring on the Old Forester or Woodford Reserve Cask Strength! Comon. Show us what you can do.

Dammit, I have drunk enough of your product across my whole life that you owe me this, especially for that one liter bottle of Lem Motlow which was Jack Daniel’s aged less than a year that really threw me for a loop Freshman year.

(If I missed something they put out at cask strength please let me know!  Given the history above it is quite possible something escaped my attention.)

4 thoughts on “Old Forester: A bit of bourbon history, some of it personal, and a review of the whisky row 1920 edition”