Four Roses distillery was bought by Japanese beverage maker Kirin at bourbon’s low point in the drinks market and exited the American market and make whiskey solely for export but then re-entered the American market with amazing creativity. They produce ten different bourbons. They have two mashbills, one high rye and one low rye, but with five different yeast strains. Their Single Barrel is always OBSV, which is high rye with delicate fruit yeast. The Al Young special edition I reviewed last year was mostly high rye with delicate fruit, with a lot of older whiskey in the mix. It was very good but I felt it was missing the oak and high proof that aged cask strength bourbon should have.

I even joked that they must have kept those barrels that went into the Al Young edition in an air conditioned climate. Seriously though, Four Roses rick-houses are all single story. With less heat, there is less interaction of the whiskey with the barrel. Too much heat and you may end up with a hot mess, and I get that, but I always wanted to try a Four Roses that had some oak to see how oak would interact with the Four Roses flavor profiles.

Out in California, where Mike Bonin, a contributor to this blog lives, many local stores by barrels of Four Roses and have them delivered at cask strength. I haven’t seen any in Louisiana except at the Bourbon House in New Orleans. Mike texted me from High Time Wine Cellars and said they had Four Roses cask strength in four different recipes, and asked me which one I wanted. I told him I didn’t care about the recipe, just get me the highest proof they have. He bought me a bottle of OESQ, which is the low rye, floral essence recipe. 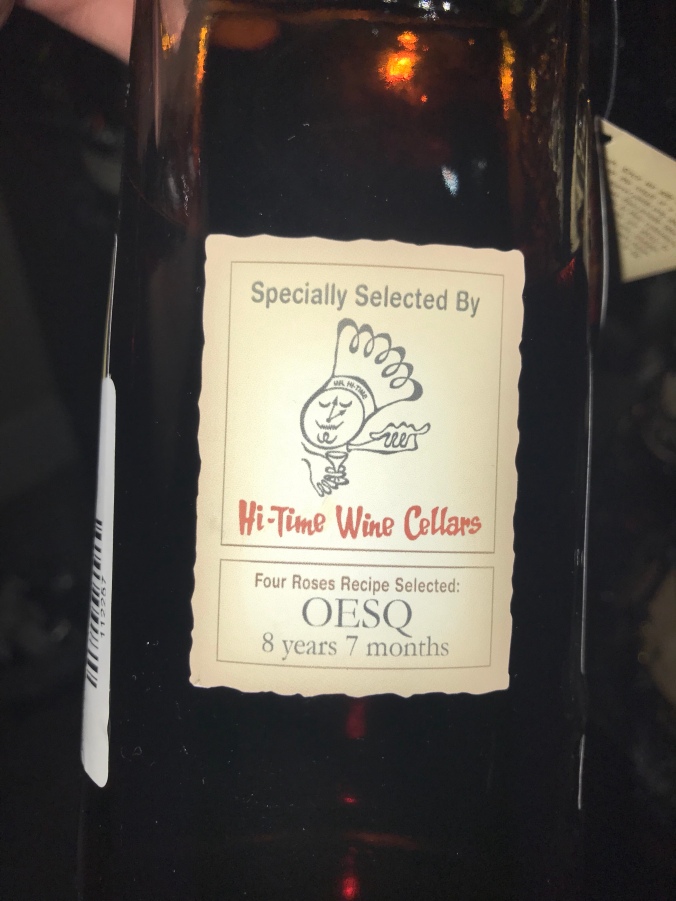 Almost nine year old whiskey, but this low rye floral essence bourbon is a bruiser at 125 Proof. This barrel must have been by a window in the rick-house and got some heat.

Color is dark amber with a slight mahogany tinge which is exactly what you want in a bourbon like this. True to the floral essence yeast I get honey suckle and cinnamon on the nose with a little bit of oak. Corn syrup, cinnamon, oak and a slight hint of leather on the profile with a velvety mouthfeel. Finish is long on spice and oak and is mouth watering. It’s a very Four Roses flavor profile but the heat and oak just add so much to it. This has, in my mind, what the Al Young bottle was missing.

Yes, I am lobbying Hokus Pokus to get a barrel of high proof Four Roses, and I will buy a case of it if they do.