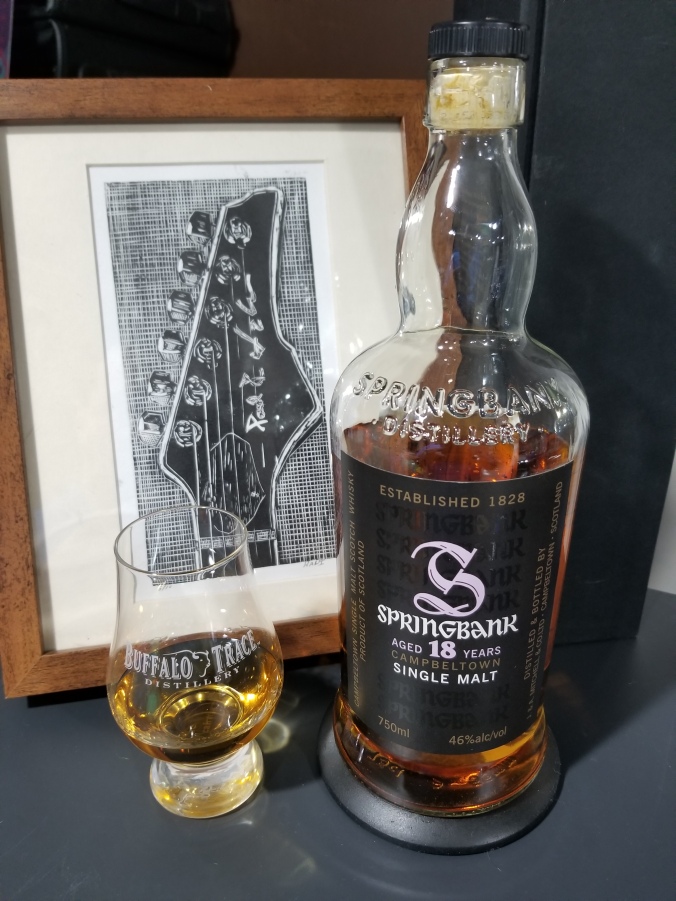 “The water was not fit to drink. To make it palatable, we had to add whisky. By diligent effort, I learned to like it.” ~Winston Churchhill

Tonight was a nice quiet night at La Casa Gibb. My direct drive digital turntable was spinning quietly with a recently purchased 180 gram vinyl pressing of Grateful Dead – Live: Vol. 1, 1969-1977. The more time that passes the more I am learning to appreciate the subtle nuances of vinyl. Regardless of what others may believe I find it to be warm and inviting, not unlike the dram selection tonight. There is something peaceful about a brisk spring night in Upstate New York (very close to Woodstock). I’m very happy with both selections tonight. Jerry Garcia strumming away on lead guitar with Ron “Pig Pen” McKernan belting out some old soul blues vocals AND a nice dram of one of my absolute favorites from Campbeltown, Scotland…Springbank 18 y/o Single Malt Scotch.

If you’re a golfer Campbeltown, Scotland from a geographic standpoint sits halfway between two British Open Championship golf courses in the modern rota in Royal Troon (the 2016 venue) and Royal Portrush in Ireland (the 2019 venue). FYI, Royal Portrush is the only Irish course to ever host a British Open, so 2019 is a big year in Northern Ireland. Another favorite distillery hails from that corner of the world, but I’ll get into that later. In case you weren’t previously aware Campbeltown, Scotland was once called the “whisky capital of the world,” with as many as 28 distilleries running to capacity, Campbeltown is a whisky-producing region on the Kintyre Peninsula alongside Campbeltown Loch. Maybe I’m just a fan of the underdog, because in recent years Springbank is one of only three active distilleries whom continue to produce whisky (no “E” in their whisky) in Campbeltown: Glengyle, and Glen Scotia are the other two. The Springbank distillery produces three distinct styles of whisky; Springbank (full bodied maritime dram), Hazelburn (peat free), and Longrow (heavily peated). All of them are good, some of them are better.

The Springbank distillery is a family-owned single malt whisky distillery founded in 1828 on the Kintyre Peninsula in western Scotland utilizing three stills (1 wash; 2 spirit) and they draw their water from the Crosshill Loch. Production capacity: 750,000 litres (or 198,129 gallons if your conversion skills aren’t up to par).
Nose: Very nice aromatics. Wet wood chips, organic honey, raisins and fresh baked goods (my mom’s strawberry rhubarb pie comes to mind) with a coastal familiarity you expect from Springbank. The salt brine notes are accompanied with lower presence of peat by comparison to their 10 y/o counterpart. A noticeable degree of hardwood smoke (campfire), liquid smoke (grilling), vanilla bean can be noticed along with a flashback to my childhood…homemade chocolate toffee bars at my grandparents farm in western Pennsylvania. Very well balanced, but that comes with a price.
Palate: Vanilla and dark chocolate dominate with sea salt. After you get a cayenne pepper kick with black licorice thrown in for good measure. I love black licorice, so any whisk(e)y I taste with that present immediately moves up in my book. Very oily mouthfeel, rich and decadent like dark German chocolate. The tip of my tongue numbs slightly with mixed salted nuts, citrus peel & dried fruit rounding it out.
Finish: Long and satifying. Salt brine with additional hints of chocolate appear on the back end too. Like eating a Heath bar on the deck of a ferry steaming from Campbeltown to Ardrossan Harbour on a clear day. Lingering spice, but nothing overpowering. This is one of my absolute favorite Scotch Whisky that I’ve tried…Really excellent.

One thing I’m not is a peat whore like some others that I know, but for me this is just right. It’s just so damn good. Peat & smoke are there and very well balanced, but don’t linger in perpetuity on either the nose or the palate. More of a slow dance with someone you love. If your taste preference is more in line with what I just described then try more from Springbank. On the other hand if you think a flaming peat bog is a requirement of your whisky then I’d recommend their heavily-peated malt whisky Longrow, and if you want something more mellow try their peat-free malt whisky in Hazelburn.

Summary: Yes, yes and yes. Buy it if you can find it and drink it sparingly. This one won’t let you down. I’ve had plenty of drams that don’t live up to the hype, but this fortunately is not one of them. Salty, savory, sweet and spicy. Hell yeah!