My Dad is a collector. Meaning he collects things with a passion. To my knowledge he has collected stamps (American and Chinese, among others) transit tokens, coinage of various types, playing cards, trading cards, yo-yo’s and associated toys, chess sets, and Kiwanis and other pins. He may have collected other things, I don’t know for sure. Two rooms of his house, three large hallway cabinets, two closets and possibly some space in some storage units house all of these collections. He has previously sold certain collections to make room for other collections. He doesn’t ever bask in the achievement of a complete or near complete collection of something and take a break. It’s not about the complete collection. It’s about the hobby. A welcome distraction from the craziness of this world.

My whole life he has tried to impress upon me the importance of having a hobby. To say he has tried to encourage me in having a hobby is an understatement. Beginning with a little white box that housed the nascent Bradley’s Stamp Collection which grew to a Minuteman Stamp Album, to a penny collection, to model rockets, to the summer I was home from college and we built a big model train layout, to me collecting a few cool bar swizel sticks at one point and Dad finding out about it and getting a bunch of them, if Dad saw that I had any interest in a hobby, he was all about that.

Now I am a whiskey guy. No longer just drinking it for drinking’s sake but trying different stuff, learning about it and writing about it, Dad is just terribly excited that I have a real hobby that is actually sticking on a permanent basis.

So, the net effect of all this is my Dad hunts for whiskey for me. He bought me my first bottle of Barrell Whiskey when he was in a liquor store out of town. He calls me from places out of town asking me if I want this or that that he has found there. I am becoming much harder to surprise given that my collection, nay, my strategic reserve, of whiskey is pretty well stocked thanks to Hokus Pokus. But Dad is not one to give up. He will keep hunting until he finds something I don’t have. He also tells everyone about my whiskey hobby and my blog. He’s proud of me for a lot of things; professionally and personally. But, being honest, he is mostly proud I have a hobby.

So a couple of weeks ago I am sitting on my porch on a weekday enjoying my morning coffee and the Wall Street Journal as is my morning routine and he calls me. This is not verbatim but the call went something like this. “Hey, I am at the Chevron station on Coliseum Boulevard, and they have bourbon here!” And then he proceeded to tell me what all they had. They had Four Roses Single Barrel so I told him to get that and then texted Hudson at Hokus to see if he had any and didn’t tell me and he said he didn’t know I liked Four Roses, but never mind so I got two bottles that day. But Dad did say they had Booker’s, Jim Beam’s cask strength bourbon. I hadn’t seen it at Hokus lately so I told him to grab that one too. I had been drinking a good bit of Booker’s at the JW Marriott in New Orleans over the course of two separate trips down there in the past few months. It was the only cask strength bourbon they had, so why not? Despite the slight tinge of Jim Beam yeast funk I think Booker’s is really good bourbon. While Stagg, Jr. is my personal cask strength bourbon favorite, Booker’s is definitely on the same level. I had my first sip of Booker’s about 22 years ago right after college. It’s always been a treat bourbon that a client or friend might get you a bottle at Christmas.

Booker’s actually got started as a Christmas present from Booker Noe, then master distiller at Jim Beam, to folks in the business, distributors and retailers, and friends and family. He used wine bottles for the bourbon and hand wrote the labels and named it for himself. He picked honey barrels of his stuff in the six to eight year range, and bottled it uncut and unfiltered. In 1988 he started releasing it to the public. At the time, cask strength bourbon was unheard of in the market. Thirty years on, cask strength bourbons are among the most sought after by serious collectors.

But Dad did me one better that day. He not only found a bottle of Booker’s, he found a three year old dusty. Not three years of aging, but three years since bottling. The 2015 release of Maw Maw’s Batch. 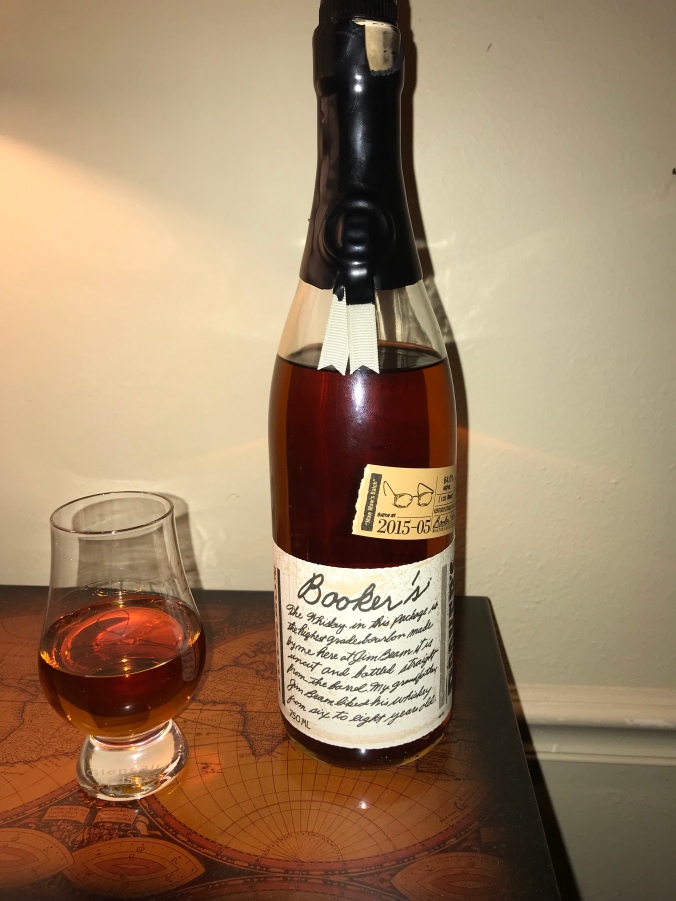 Now, this bottle ends up being particularly cool not just because it got released three years ago. The Noe family had a maw maw. The Drell family has a maw maw; my Dad’s mother and my paternal grandmother was affectionately known as Maw Maw. The bottle’s label has old lady glasses as a trademark; my Maw Maw wore old lady glasses. Noe’s Maw Maw drank bourbon; so did mine despite being a Baptist. Maw Maws wear old lady glasses and drink bourbon. It’s obviously a Maw Maw thing in my estimation.

So anyway this is a really great bottle of Booker’s. Wonderful corn syrupy sweetness on the nose and palate, along with slight hints of oak and leather. Stupid terrible smooth given that it’s 128 proof. Well balanced truly excellent cask strength bourbon. The kind of bourbon you sit in a reddish leather chair in your study and sip while writing about your Dad, as I am doing presently. Maw Maw’s Batch is definitely a good one that I am lucky I got to try three years after it’s release, because, frankly, I missed this bottle because in 2015 I was really just beginning to turn bourbon into a hobby and was just beginning to buy limited release bourbons. November 2014 was when I bought my first bottles of Pappy and George T. Stagg. Maw Maw’s Batch didn’t have a chance to be in my collection as my nascent collection was just getting started when it was released.

Thanks Dad for encouraging my hobbies; I have a feeling he will be more than pleased when he finds out exactly what he found. He found a cool really good bottle released three years ago that should otherwise be off the shelves and unavailable forever. Knowing him, he will think that is really cool that it found it in a gas station on a weekday morning. It’s the collector; finding cool stuff in weird places.