Every great Bourbon, or in this case Rye, has a good story and mine has nothing to do with the distillation of a truly American spirit. We all have a story about how we met some cool people at one point and had a good time, but I have been fortunate enough for one of these stories to turn into a lifelong friendship between people who would otherwise be strangers in every facet of life except one. That singularity is why I’ve fallen in love with bourbon and why I consider myself lucky to be nominated to the Friends Of The Trace (FOTT). 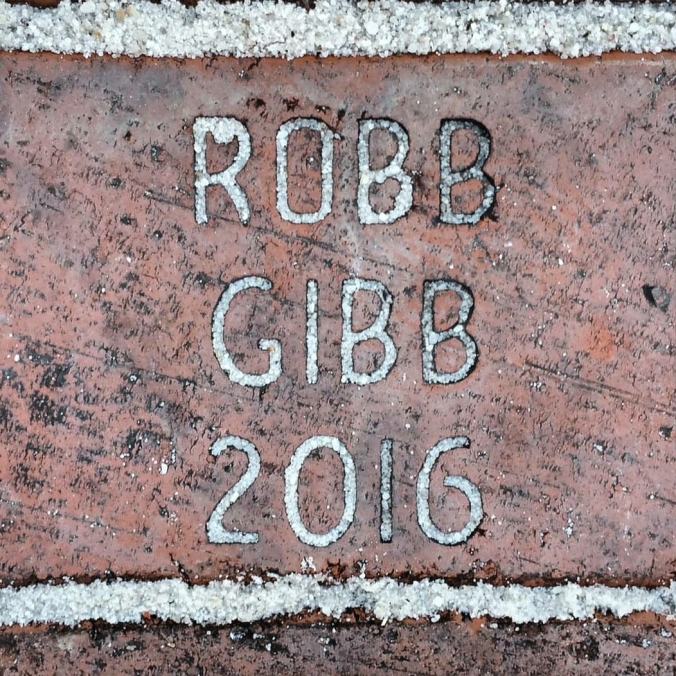 (My FOTT brick under the water tower at Buffalo Trace Distillery)
A few years ago I was in pursuit of a unicorn (an unobtainable bottle) for a friend who was retiring and I had the brilliant idea to pick up the phone and call Mark Brown directly.  Bold yes, stupid definitely. The best part is he answered and for all those who know how uncommon it is for the President of any company to take your phone call, it’s par for the course at Buffalo Trace Distillery.
Fast forward sixth months… 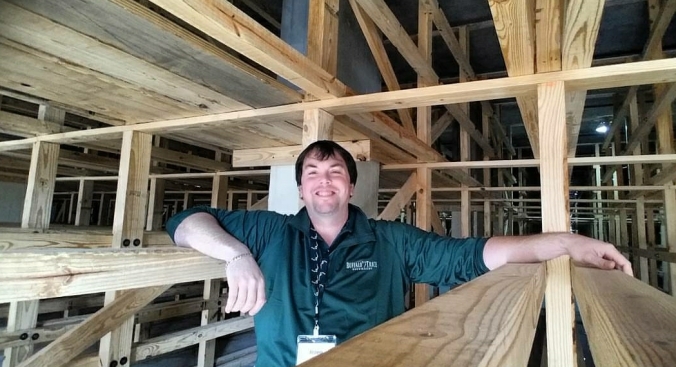 (Inside Barrel House D)
For anyone involved with the Friends Of The Trace, Whiskey Weekend is an event not to be missed. Private tours, cocktail parties, offsight activities, exclusive tastings etc…Buffalo Trace really does it right. The morning I arrived with my close friend Glen Coombe we got registered for our tour and then went shopping. I had to buy a long sleeve zip up because it was colder than a well-diggers ass and I would have frozen to death if I didn’t purchase something quickly. Anyone who has been to Kentucky in April knows the cold I’m talking about. It’s that bone chilling, breath taking lack of heat that sucks the warmth from your body faster than you snap your fingers. 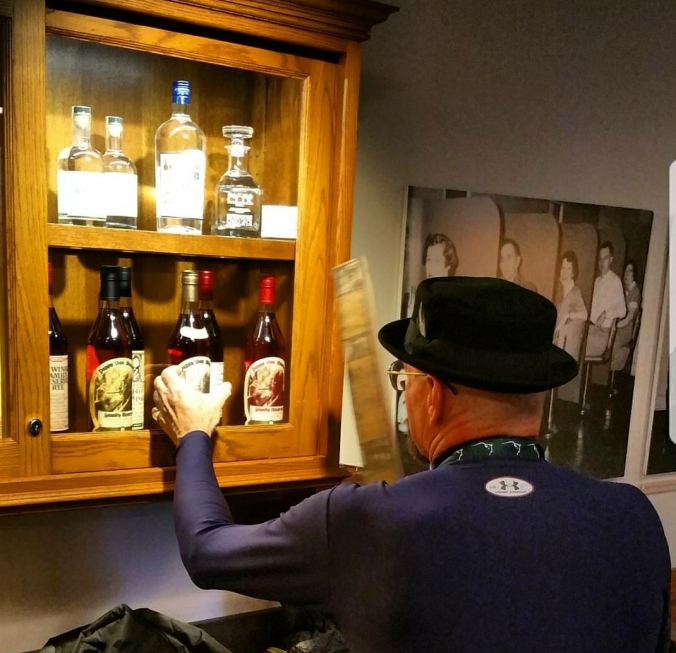 (Glen not really breaking and entering)
We started off at Barrel House X to try some experimentals; Amaranth, Experimental Six Grain and the new Col. E.H Taylor Four Grain. After the tasting & tour of X, we headed down the hill for a private behind the scenes tour. And that’s when I noticed this prim & proper Englishman without a nametag gladhanding the high rollers. Twenty minutes into the tour Mark Brown steps forward to pull us towards one of his favorite pseudo tour stops, the Pappy & Weller Barrel House (Barrel House which was constructed quickly during WWII out of concern that the world could possibly run out of whiskey) and the recently uncovered Bourbon Pompeii.  Speaking of Bourbon Pompeii…Did you know? Records indicate that distilling started on the site that is now the Buffalo Trace Distillery in 1775 by Hancock Lee and his brother Willis Lee and the oldest building on the site, the Riverside house, was constructed in 1792 by Commodore Richard Taylor and is still standing. The history around Buffalo Trace Distillery is remarkable actually, but I digress…I can’t behind to tell you how cool it is to have the company president answering every question, stopping to explain obscure facility buildings, company history and literally anything we wanted. 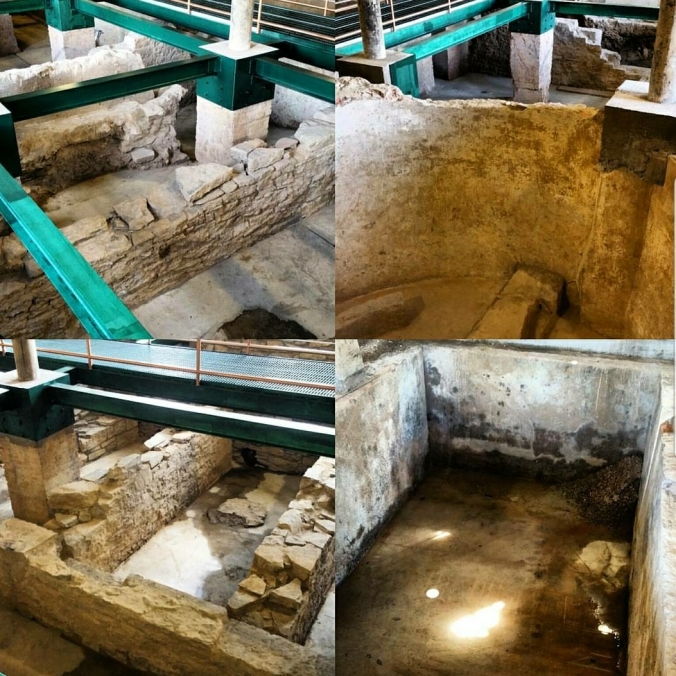 (Bourbon Pompeii)
Before that day at Buffalo Trace was over I also had the good fortune to meet two couples that I became fast friends with and speak to on literally a daily basis. Before the cocktail hour the first night of Whiskey Weekend I was walking around taking a look at all of the historical material located upstairs (above the store) and I happened to migrate over to the bar to put down my stuff and almost simultaneously Mike & Jamie Bonin as well as Bradley & Catherine Drell ended up doing the same thing. Two hours later we were still talking, but I hadn’t noticed the room was now full of FOTT members and guests. 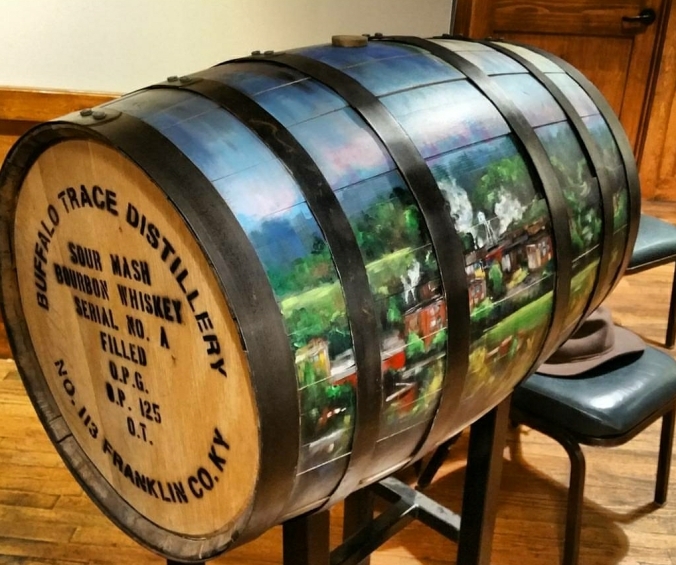 (A painted commemorative barrel above the gift shop)
This is one of those elements of drinking bourbon that I find most fascinating. Being in a room full of people where no one does the same thing as far is a career choice, their family background or personal lives BUT we all have one thing that we enjoy and can talk endlessly about in respect to bourbon or whiskey. As a PGA of America member professional I can tell you that golfers share the same experience. When we find ourselves in a room with somebody who has played our favorite course or a course maybe that we haven’t yet had the privilege to play we can go on and on at length about personal experiences that we’ve had, shots that we’ve hit or any other number of memorable rounds that we’ve played on some random golf course around the globe. I guess this is why golf and whiskey are inexorably intertwined. You can’t remove one from the other. 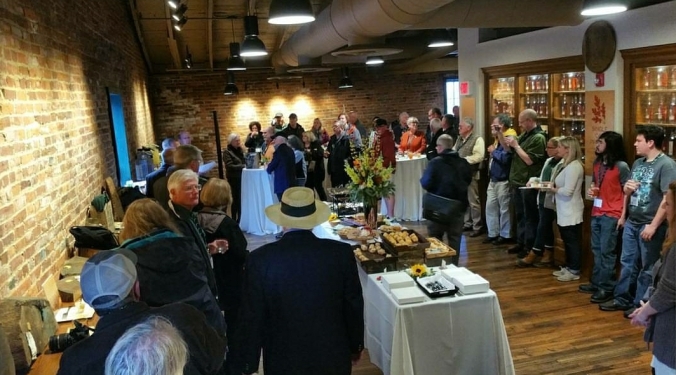 (Whiskey Weekend Cocktail Party April 2017)
So getting to the whiskey…The reason why I chose this particular brand to start off my blog  is due to the fact that the following day at “The Farm” we had a FOTT dinner party and the very first thing I noticed on the bar were three bottles of Col. Edmund Haynes Taylor. Four Grain, Single Barrel & Straight Rye. Several hours and several drams later Bradley & Catherine were recanting their trip to Scotland (specifically Glenmorangie and their mashbill of rye with just a little barley for the enzymes) and Mike was seen filming a behind the scenes video of the staff prepping dinner, random groups of FOTT members scattered around the party and us raiding the bar(s). Then there was the bus…this is still one of my favorite nights ever. A perfect storm of educational and hysterical. 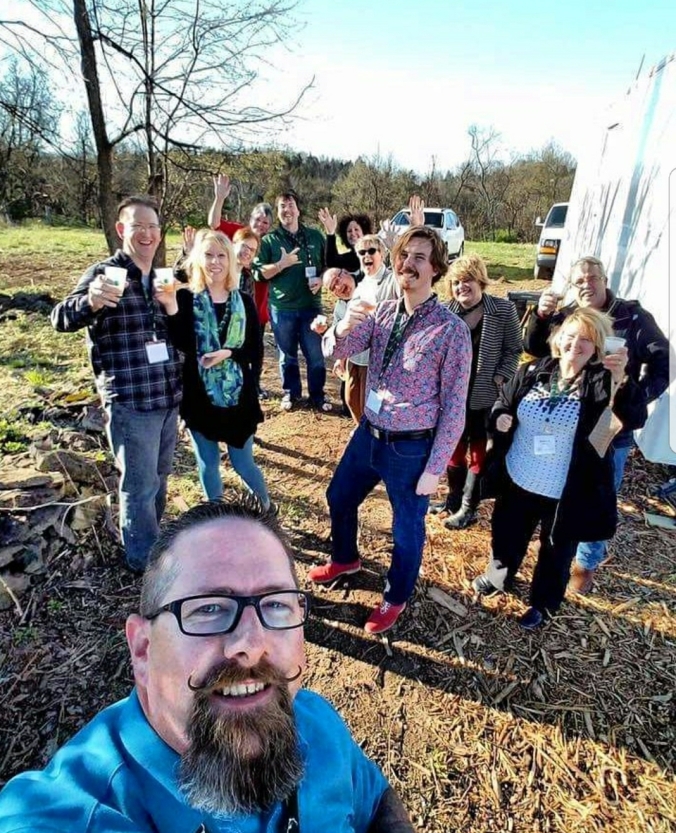 (Photo taken by the selfie extraordinaire Mike Bonin.)
All things happen for a reason and that weekend I was meant to meet the Bonin’s and the Drell’s. Talk about right place at the right time. And talk about a good looking bar… 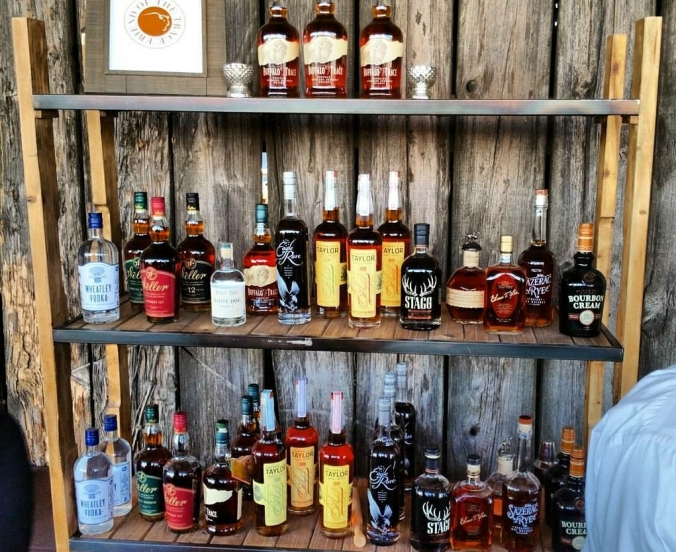 (The coolest bar ever constructed)

About:
Did you know that Col. Edmund Haynes (EH) Taylor Jr. was the descendant of two U.S. Presidents? E.H. Taylor, Jr. had a rare leadership quality to him and he accomplished a lot during his life by sheer strength of will. He was a larger than life persona that happens to be the father of the modern bourbon industry. The Straight Rye Whiskey bearing his name is unique with a mash bill consisting of rye and malted barley.

Distiller: Buffalo Trace
Mashbill: Rye and Malted Barley
Cask: New Charred Oak
Age: At least 4-years-old
ABV: 50% (Bonded)
What is Bottled-In-Bond?
Bottled In Bond is a label for an American made distilled beverage that has been aged and bottled according to a set of legal regulations contained in the United States government’s Standards of Identity for Distilled Spirits, as originally laid out in the Bottled-in-Bond Act of 1897. The legislation was passed to guarantee that consumers weren’t purchasing fake whiskey and was strongly supported by Col. E.H. Taylor. Bottled-In-Bond (BOB) means that it’s the product of one distillation season, from one distiller at one distillery whose bourbon has aged in a federally-bonded warehouse under the supervision of the U.S. Federal Government for a period of four years (or more) and bottled at 100 Proof (50% alcohol).

Nose:
This is very complex, with spice and sweetness profile complimenting one another. Cigar box, tobacco, black raspberries, nutmeg, caramel, anise and toffee are things I notice. The spice takes the lead but never dominates, allowing the sweeter aromatics to co-mingle. EHT Straight Rye has a crisp note with a slightly bitter undertone. I found the scent balanced the woody caramel and vanilla on the one hand, and pepper on the other. A floral quality of red fruit rounds out the experience.

Taste:
Balanced wood, sweet and spice hit you first with the spiciness coming across as deep burn rather than hot and biting. The flavors of the Taylor Rye are big, but too well-balanced to be called bold. White pepper and barrel char carry soft caramel notes infused with fresh vanilla bean and then sweetness shifts from red berries to sugar plum & organic honey. The finish is long and rewarding, delivering a strong, yet satisfying experience.
Price:
Retails at $70.00 and Col. E.H. Taylor is only sold in the United States.
Verdict:
👍👍⬆️ 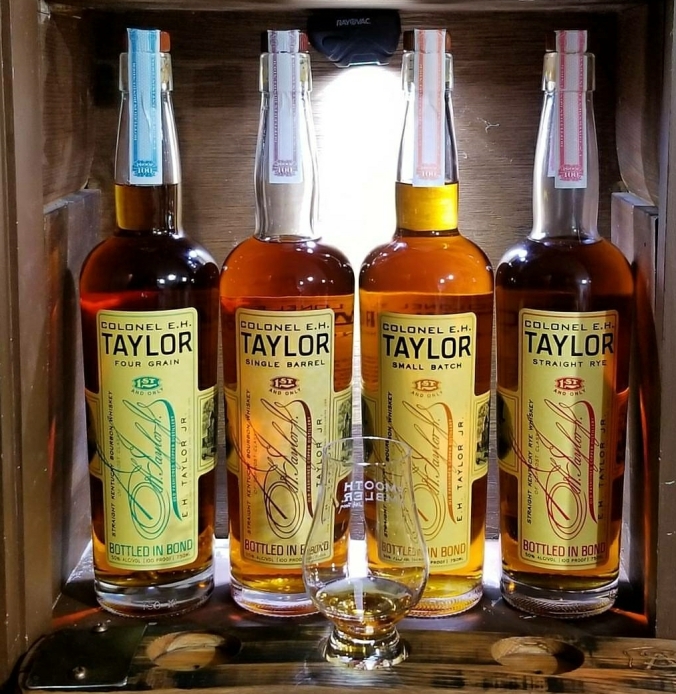 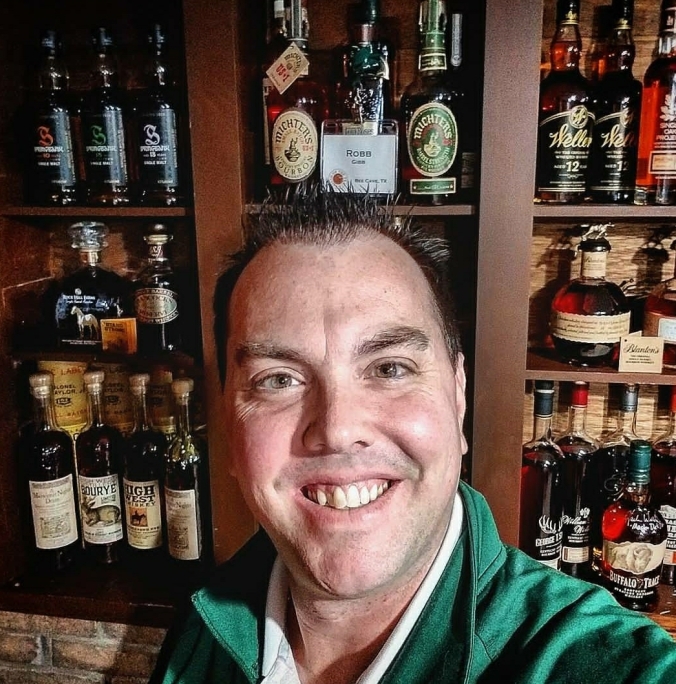