Yellowstone is an old bourbon brand that was resurrected by a part of the Beam family and the brand has since been sold to Luxco who is most well known for their Rebel Yell whiskies. So, this, like most Luxco whiskies, will be made at Heaven Hill and aged at Luxco.

This really wasn’t on my list of must haves. My wife found a bottle yesterday and picked it up for me to try. It’s 93 proof and I think whiskies are better at 90 proof or above. 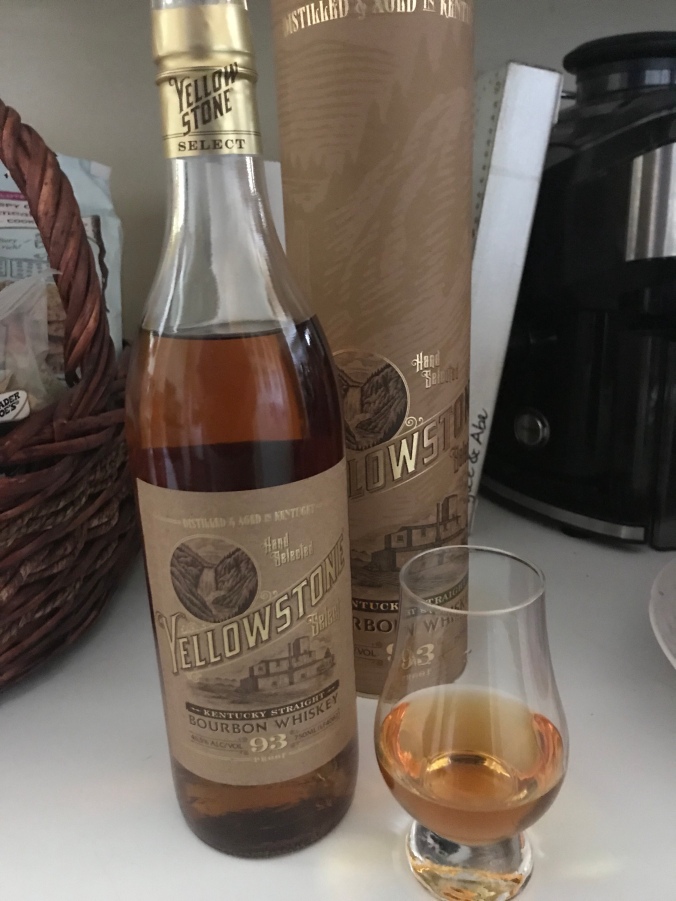 In the glass it is a very light color; more the color of scotch than bourbon. Long legs though; a bit oily like an older bourbon. Nose is very light and delicate. A whiff of candied cherries maybe. On the palate is rye spice with a little bit of that Beam family yeast funk but it’s no where near as bad as some other Heaven Hill bourbons. There is nice caramel and vanilla notes. Slightly warming finish with dry cinnamon like I would taste when I put too much cinnamon on french toast as a kid and I would pour syrup over it and there would be these dry islands of cinnamon on the toast that the crashing waves of syrup could not tame.

I am afraid this is pretty young bourbon for the most part; the color, lack of oak, and muted nose are pretty revealing about that. Four to five years old since there is no age statement but it is still straight bourbon. It has a really decent mouthfeel though; it’s main redeeming characteristic. I think they put a little bit of older bourbon in there to get that effect. I really wish they had bottled the older stuff and let the younger stuff age for three more years.

Cool bottle, cool tube, decent bourbon but it is over priced at $40 a bottle. I could say this would be a good whiskey to start sipping bourbon neat, but for less money you can get Buffalo Trace, Eagle Rare, and EH Taylor Small Batch, and I have to say those are all probably better as far as flavor. But I have to admit the oily mouthfeel maybe helps justify the price.

It’s a light younger bourbon but with that expensive mouthfeel. It’s really kind of trip as far as that goes. Definitely different and worth trying to see if this bourbon is your thing. I am now going to let this bourbon oxidize for a bit to see what happens. I was very disappointed in 1792 Sweet Wheat until I let it oxidize for a bit. I have a sneaking suspicion this bourbon might become amazing with a little air.