Well, Game of Thrones is back for its final season! To say my family is generally excited about this is an understatement. One of my step sons actually texted me and Catherine last night asking if we were “ready” for Game of Thrones tomorrow night. I replied, you betcha, and he replied with “Excellent!” I should have replied “I have my GOT whiskey ready…”

Diageo, the international whiskey powerhouse, put out a set of limited scotch whiskies to celebrate the event. Of course, the one scotch I really wanted out of the collection, the Oban representing the Night’s Watch, was snatched up so fast my local didn’t receive any. Diageo also put out a White Walker scotch which Hokus did have, but I’ve never been a fan of Johnnie Walker Red. So I didn’t bother buying that one. But I did manage to pick up one of the bottles – the Lagavulin 9 year old dedicated to House Lannister.

I have a love hate relationship with Islay scotches. A small island off the west coast of Scotland, the only fuel they had in the past to dry the malted barley was peat. Peat is what really differentiates Islay scotches from other regions of Scotland. The brands are so venerable, they take such great care in making their whiskies. But the peat, damn, it’s just heavy. Oban is about is peaty as I like. But, I decided I had to have the Lannister bottle; Tyrion Lannister’s quote, “I drink, and I know things” just really resonates with me. 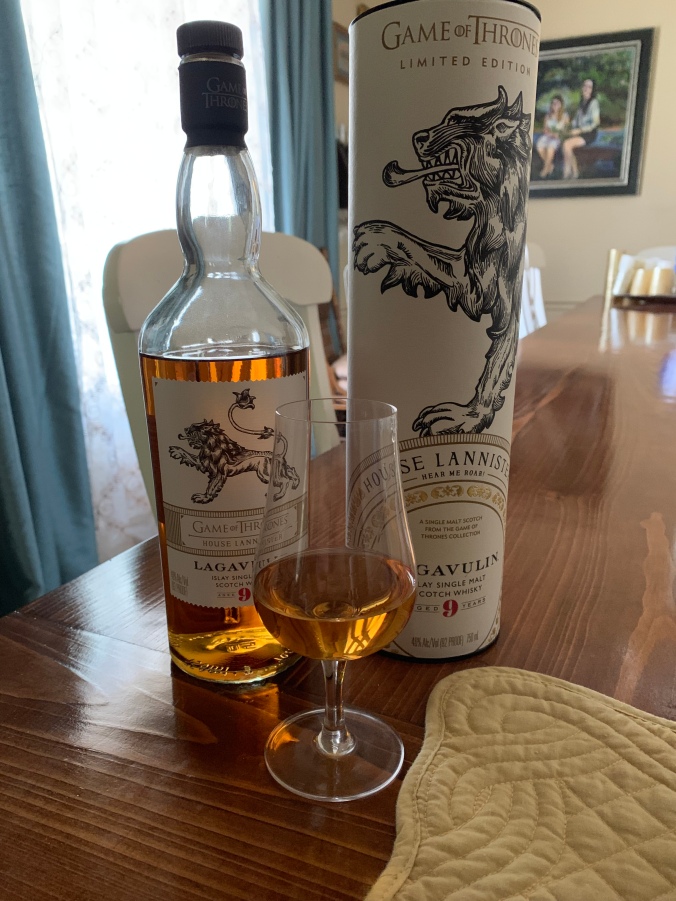 The whiskey is golden straw in color, and comes in at a typical 92 proof for scotches. On the swirl is a thin sheen and this legs. On the nose is heavy iodine, sweet fruits, straw, and barley malt. The mouthfeel is very rich, again with iodine, although lighter than on the nose, sweet fruits, salt, and straw. On the finish, the iodine continues to make its presence known, along with herbs and sea salt, with a long lingering finish that you can even sense when you exhale through your nose a few minutes later. Very bold flavors.

It’s a very good scotch. But Islay whiskies, as well as other island scotch whiskies such as Talisker and Highland Park, with their peaty flavors, are very much an acquired taste. It’s a taste I really wish I could acquire and just love. My brother and so many of my friends just love it. When it comes to scotch, I am a Glenmorangie and Oban kind of guy.

But, given the number of different whiskies I have tried and continued to try, I can appreciate the flavor profiles, what different distillers are trying to accomplish, and the quality of the whiskies. What I will say though is that among the various Islay whiskies, I find Lagavulin to be the most tolerable. Once I ordered a glass of Kilchoman at the bar of the Bentley Room, neat, in a brandy glass. I wanted to try it. It was so peaty, not only was it hard to drink, other patrons at the bar up to five feet away could smell it. Lagavulin, thankfully, is not that. It’s peaty but definitely drinkable. It’s also one of those whiskies that should be on everyone’s list to at least try. It’s Lagavulin for crying out loud. I may not love love love it, but I totally get why someone would.