Last weekend I was down in New Orleans for my Mardi Gras krewe’s annual dinner, and Catherine and I decided to make a weekend of it. Catherine and I ate at Briquette, which I highly recommend to Buffalo Trace fans like myself; my review of the spirits menu revealed that all of the specialty cocktails use Sazerac company booze. The food was great too. I think all I need to say here in dark chocolate Creme Brulee after the most wonderful Oysters Bienville and an amazing duck dish. We need more of that in the world.

While I buy 99.99% of my whiskey from Hokus Pokus in Alexandria, I do have to say I check out other liquor stores from time to time. One of my favorites in Keife & Co., a small store near downtown at the corner of Howard and Carondolet. They always seem to have interesting stuff, including elegant chocolates, Iberico Bacon, and hard to get wine and spirits. The place is literally an adult toy store. Cat and I decided to drop by there on the way to our hotel. I found an interesting store pick bottle of a bourbon I have never heard of – Ragged Branch.

Ragged Branch is a craft distiller in Virginia that is doing the whole farm to bottle deal, growing the grains on the farm, distilling and aging right there, and feeding the used mash to cows and selling the beef. The former master distiller at Whistlepig was consulting with this outfit in the making of their whiskies. They offer a wheated and a high rye bourbon, at 90 proof. Coming soon is their “Cowboy Cut”, a cask strength offering.

However, Keife & Co. managed to get an early preview of the Cowboy Cut via a store pick. 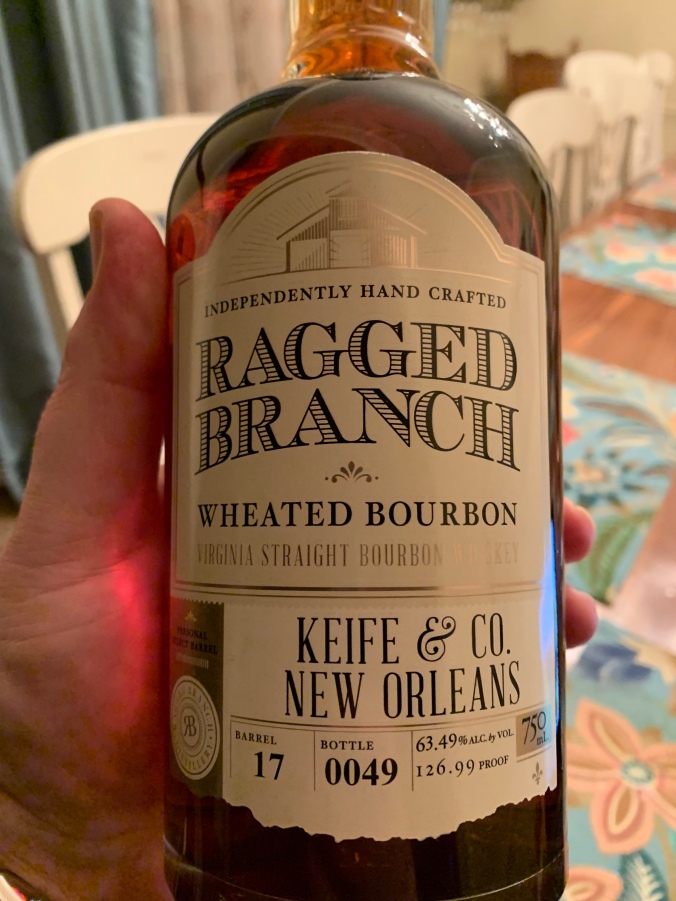 While it doesn’t say it is cask strength, at 126.99 proof it certainly has to be uncut.

The store offered Cat and I a sip of it before we bought it. I was less than thrilled with my taste of it, but Cat liked it, so I picked up a bottle to give it a serious review. As I have stated, her palate is better than mine.

The color on this is a deep copper with reddish overtones. On the swirl are some serious long legs. On the nose is green fruit, floral essence, light cinnamon, grains, with some slight medicinal overtones. The palate is extremely floral and fruity, again with the light cinnamon, green apples, and then is a flavor I can only describe as floral bitters. Cat likes the floral bitters more than I do; then again she prefers good scotch whereas I prefer bourbon. But the amazing thing about this whiskey is the mouthfeel and how smooth it is despite the high proof. The mouthfeel is wonderfully thick and has very very little burn on the palate. Normally my wife feels the burn at this proof; but not with this.

Ragged Branch is obviously doing the right things as to how they are distilling their spirit. The grains are obviously top drawer. What I suspect is that they are releasing their whiskey a little bit young, which is where the bitterness comes in. I have noticed a lot of craft distilleries have this same note although this is better than a number of craft whiskies I have tried. Whiskey making is a long term investment and the temptation to release whiskey as soon as it is drinkable to generate cash flow is a huge. Being a bankruptcy/commercial/finance lawyer, I totally get that. But, I suspect that aren’t releasing everything they make at the four year old age, and when this spirit hits seven or eight years, I think it will be something quite special. But, good on this craft distillery for doing so many things right, and on Keife & Co. for buying a barrel and offering customer’s samples if they are thinking of buying a bottle.