Last weekend, I participated in a fundraiser for a local art center, River Oaks, which is known as Men Who Cook and Mix. I was invited to be on the team for Lagniappe Home Care, and we were on TV very early Friday morning. Our dish was a soul food parfait, with layers of Mac and cheese, cut up pork chops in gravy, stewed greens and corn bread crumbs. Hey, we won third place out of thirty some odd teams based on tips. 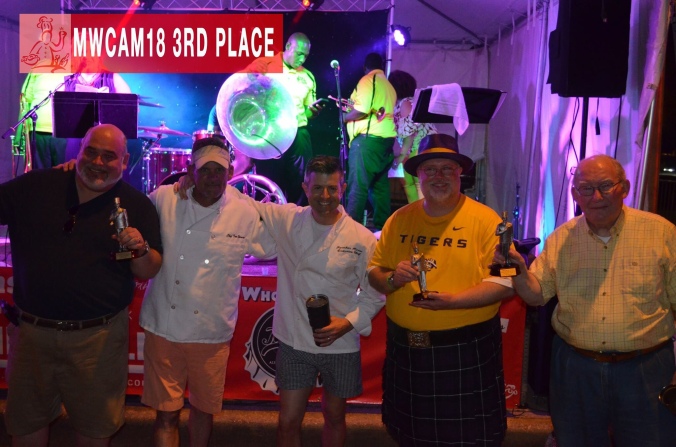 Our intrepid leader wanted a cocktail to go with as a lot of teams do and had put on the team form the soul food parfait would be followed up with a “shot of sweet tea.” This occurred without my knowing, and his idea was to serve Tito’s vodka and Milo’s sweet tea. I just couldn’t handle that. I. Just. Couldn’t.

So Friday morning while we were in KALB studios I convinced him to let me create a bourbon based delicious iced tea cocktail for Men Who Cook and Mix. We announced we would be serving Kentucky Iced Tea on the broadcast. I had no idea what that cocktail would actually be. However, I went and bought four handles of Benchmark Bourbon and set to work on a cocktail recipe.

What I came up with was a hit at the event. Even though we were serving this drink in small dixie cups we used all four 1.75’s. People who don’t like bourbon liked it. People who like bourbon loved it. It had complex layered flavors people appreciated.

By the drink-or cocktail for two really:

Pour ingredients and stir in a cocktail shaker and pour over ice in an old fashioned glass. I use Cocktail Artist Mint Syrup that Wal Mart carries.

Stir and serve over ice. For the event, we used bags of Sonic pellet ice which are great and you can buy for around $2 a bag.

On a hot summer night, this is really a great cocktail. One of our team members said he wanted to drink a pitcher of this on the beach. One of the guests said we could throw away the soul food parfait stuff and just have more of this. But people really reacted to this cocktail because of the layers of different flavors.

So, here is an “award winning” bourbon cocktail recipe that is really a crowd pleaser.