Jim Beam, probably the largest of all bourbon producers, early on sensed a change coming in the bourbon marketplace in the wake of Blanton’s Single Barrel, and developed their small batch collection in the early nineties. Booker’s is the cask strength member of the collection and really introduced cask strength bourbon as a staple in the market. Basil Hayden’s is an eighty proof version of Old Grand Dad, beloved by many but at its low proof is not a particular favorite of mine. Knob Creek is probably the most popular bourbon in the collection, which grew from a nine year old 100 proof bourbon to a whiskey that has Single Barrel versions at 120 proof including store pick barrels, limited editions including a cask strength version I have, and a standard edition that has lost its age statement because of high demand.

Then there is Baker’s. Rather unsung out of the Jim Beam Small Batch Collection, it is a 107 Proof (kind of an odd proof) 7 year old bourbon. 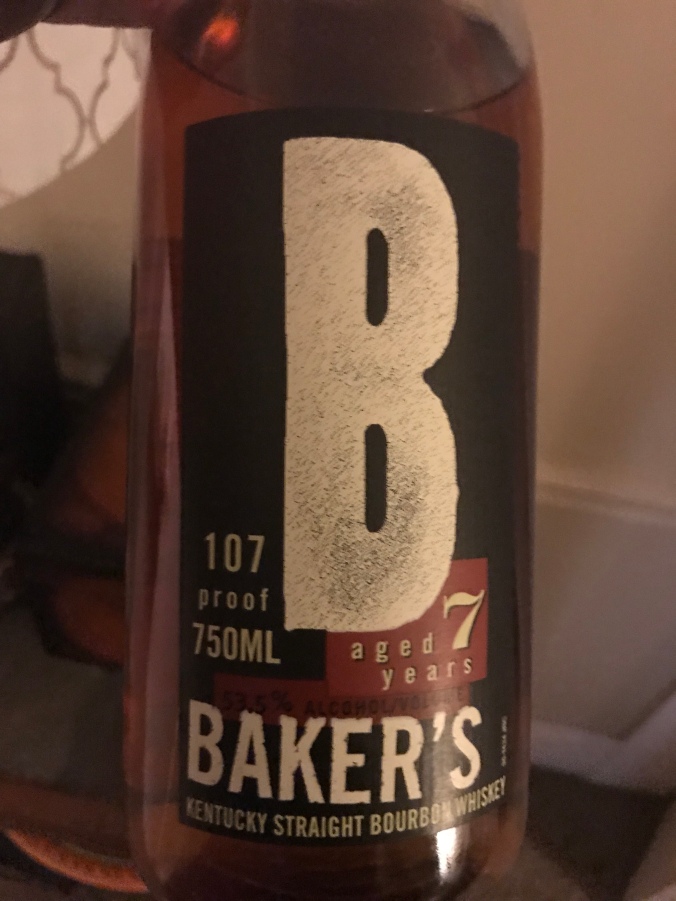 Named for a former distiller at Jim Beam who worked under Booker Noe, I had never bought a bottle or tried it in a bar until I got a bottle recently. Robb Gibb, a co-author of this blog, told me this was a solid pour, so I thought I would give Baker’s a shot.

Color is a nice amber, nothing spectacular. When I uncorked the bottle and sniffed it, this wave of cinnamon hit my nose and I thought “this is gonna be good!” Nose is this amazing balance of cinnamon and corn sweetness, but floral which is not something I normally pick up in Jim Beam bourbons. It’s a really nice nose. Palate is sweet followed by loads of cinnamon, reminding me of when I would overload my French toast as a kid with cinnamon such that the syrup would roll off some of the cinnamon that would remain dry. Delicious with a nice lingering finish. A nice desert bourbon that is smooth yet complex. No Jim Beam peanut yeast funk on the finish which shocked me. Only criticism is that the mouthfeel could have been thicker. Yeah, I had to get that nitpicky to find a criticism.

I am therefore at a loss to figure out why Baker’s never really took off compared to other Jim Beam Small Batch Bourbons. It’s better than Knob Creek or Basil Hayden’s. It must be the packaging. Booker’s has the same bottle with wax but comes in a cool wooden box. Knob Creek has the cool looking square bottle with the strange newsprint looking label. Basil’s has the draped butcher paper label with the wood band with the little metal “bh” on it.

Plain wine bottle with a big black label with a white B on it. I think marketing screwed up here, since it’s really really good and really should be selling more. Or, maybe they didn’t and Jim Beam wanted to put this out there without there being a run on supply.

Blake Riber interviewed Baker Beam and I agree with Baker. This is a really nice, spicy, medium bodied old school bourbon. I am more than pleasantly surprised at how good this is.