Having been on distillery tours in Scotland and the United States, the Glencairn glass is pretty ubiquitous in use in the whiskey world. Designed in the UK originally for scotch whiskey, Glencairns pretty quickly got picked up by the bourbon world, and my first Glencairn glass was labeled with Old Forester’s 75th Anniversary logo. Woodford Reserve included these glasses in boxes with a fifth of their bourbon for a good long while, and I have quite a few of those. But before the Glencairn and even today, distillers and blenders used and continue to use copita glasses for technical nosing and tasting. When at Glenmorangie House in Scotland on a whiskey weekend, you could buy a Glencairn in the gift shop, but copitas were used for all of our tastings.

The copita glass has an interesting history. Initially, the glass was used for Spanish sherry (thus the name copita, which is a Spanish word for glass), but then the glass was repurposed for other beverages. Known as the Dock Glass in the 16th and 17th centuries, it was a glass for nosing wine and spirits from barrels that arrived at a dock to determine whether to accept or reject a particular barrel. The usefulness of the glass lies in its bell or tulip shape with a narrow opening which captures the smells of the wine or spirit, but also keeping the smells of your hand away from your nose. I also find them handy because they are stemmed which makes it easier to hold the whiskey up to the light to observe the color and the legs when you swirl the whiskey. But, the big thing with a copita as opposed to other whiskey glasses is the nose. The small opening really concentrates the smells, which also enhances the taste, for better or for worse. Unlike the Norlan glass which intentionally dissipates unfavorable aromas with the wider opening and the wings at the bottom, a copita concentrates the aromas of a whiskey (or whatever you put in them) in an unvarnished fashion.

Hokus Pokus recently acquired some copitas with their logo on them, and they are very reasonably priced at $10 a stem. 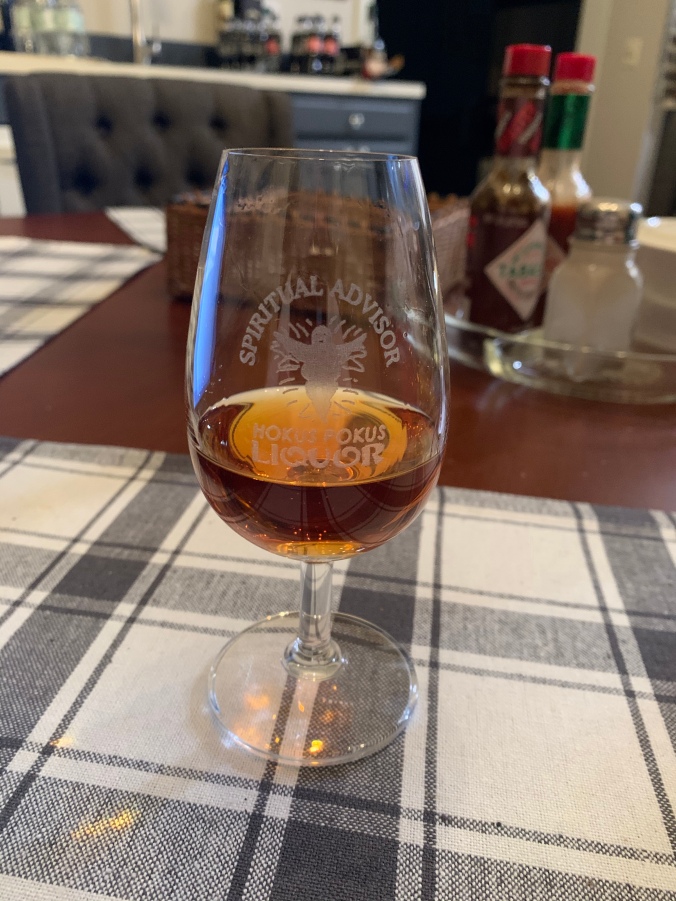 These are sourced from the UK from UrbanBar by an American barware dealer that Hokus used for their Glencairns. The shape is absolutely right (unlike some copitas I bought on Amazon that are really just stemmed Glencairns) and, sampling some Knob Creek Single Barrel to try it out the smaller opening really does concentrate the aromas of the whiskey in a way that a Glencairn does not. I then put some Bulleit Blender’s Select in the glass, and found that really taking a dip whiff of the whiskey and then tasting really enhanced the flavor as opposed to a Glencairn. I would note that the Hokus Pokus copitas have a narrower opening then other copitas I have used. The opening just covers both of my nostrils with no wasted space, which is exactly what you want in a copita. This is a truly great nosing glass.

So, I am not going to quit using Glencairns when generally enjoying a whiskey. But, for a technical tasting or when I am really taking my time to enjoy a particular whiskey while nosing it a good bit, these glasses will obviously be my go to and you will be seeing these glasses in a lot of pictures on my blog in the future.

Good on Hokus Pokus for adding these to their barware offerings. And not just good on them that they added copita glasses to their stock, which is cool in and of itself, but that they added truly excellent copitas from a technical standpoint.