Happy St. Patrick’s Day! While I would normally be sucking down pints of Guinness and drinking Green Spot or Tullamore DEW, Louisiana has closed down all bars. So, I am at home, hanging with my step son who is home from LSU, celebrating St. Patrick’s Day the best way we can – with a bottle of Irish Whiskey my Dad brought me back from Ireland, although it does have limited availability in the United States. 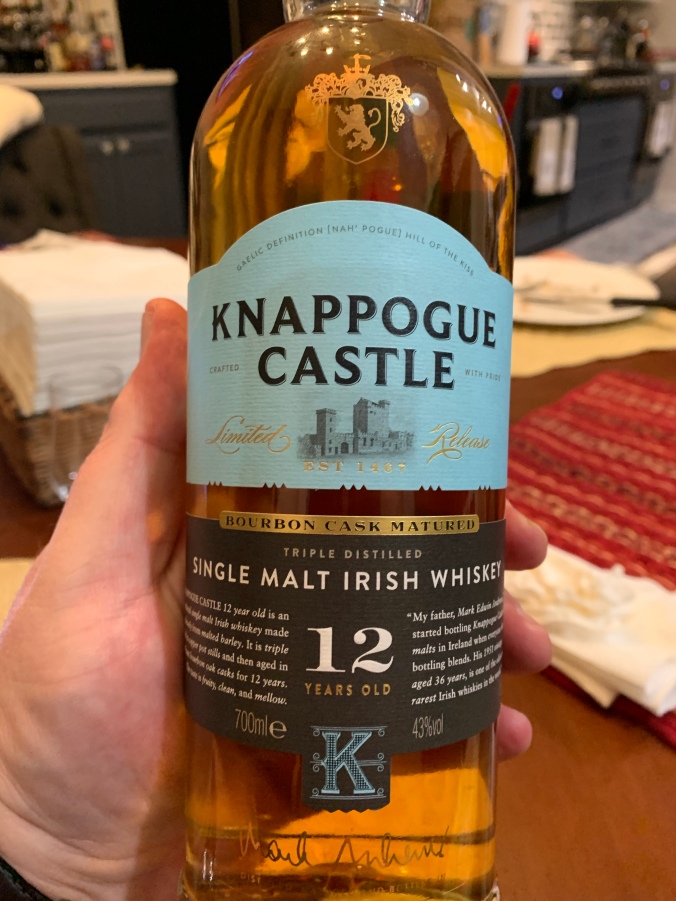 This whiskey has a fascinating story. Knappogue Castle itself in Ireland had fallen into disrepair after its founding in 1467. In 1920, a Texan by the name of Mark Edwin Andrews purchased and restored the castle. He started buying whole casks of Irish whiskies from the many distilleries open at that time, and started aging his own whiskey in Ireland, and then began releasing expressions that were long aged, up to 36 years old. His son, Mark Andrews, III, continues to develop the brand.

Irish whiskey has a four different styles – Irish Single Malt, which is an unpeated malt whiskey, Irish Pot Still, which is mostly unmalted barley in the mashbill and distilled in pot stills (originally to avoid a tax on barley malt), grain (mostly rye or similar grains), and blended which can have elements of all three. This particular Irish whiskey is a single malt, made with a 100% barley mashbill, and is triple distilled in onion shaped pot stills to 130 proof, losing the heads and tails.

Knappogue Castle 12 year old is 86 proof and aged in ex-bourbon casks. A very American inspired Irish whiskey to be sure. They only bottle single malts that are aged stated, and have been doing so at a time when most Irish whiskies in the market were blends.

Color is a beautiful golden straw color; the internet confirms that there are no colors added. This is a perfect color for a whiskey aged in bourbon casks at that climate. A swirl reveals a nice film and legs; well made spirit this. On the nose is wonderful barley, fruity, and biscuity notes. Lovely. Definitely comparable to high end unpeated scotch. On the palate are some lemon notes common with bourbon cask single malt with long age, but then comes the green apples and slight cherry notes, slight black pepper, and baking spice. I don’t know where they got their bourbon casks from, but there was definitely good bourbon that got soaked out to add flavor to this wonderful whiskey. Despite the low proof, this has a very thick, rich mouthfeel, which is a testament to the quality of the spirit. The finish goes on and on and gets spicier as it lingers.

The more higher end Irish whiskey I drink the more I truly appreciate its quality. But, when you can find this one in the United States, it is around $45 to $50 a bottle, which really is a nice price point.

On this St. Patrick’s Day, it is good to remember that the huge number of Irish immigrants to America contributed a great deal to American rye and bourbon distilling. It’s also good to think about a Texan descended from those Irish immigrants making it big here and going back to Ireland, restoring a castle, and bringing aged stated Irish single malt back to the fore. And that is something I am glad to drink to tonight.