Happy National Bottled in Bond Day! On March 3, 1897, 123 years ago, Congress passed the Bottled in Bond Act, one of the federal government’s first efforts at ensuring pure consumable products and truthful labeling for those products. Col. E.H. Taylor who ran both the George T. Stagg and Castle & Key Distilleries was the major driving force behind the act. The Act was passed in response to bottles of spirits being sold that had who knows what in them and came from who knows where. And, much to my capitalist sensibilities, it gave a tax break to those who complied.

For a spirit to qualify to be labeled as bottled in bond, it must be made in America, and:

1.) Be the product of a single distillation season, from either January to June or July to December;

2.) Be aged in a bonded warehouse for at least four years;

4.) Be distilled by a single master distiller at a single distillery, and the distillery must be listed on the label.

If a distillery produced a whiskey according to these regulations, the distillery would only be taxed on the bottled whiskey that left the bonded warehouse, and could avoid paying tax on the angel’s share of what evaporated from the barrel. Gotta love a federal government who gives tax incentives to make better bourbon!

Bottled in Bond was, and is, the original small batch spirit. Unlike small batch which is totally ill defined legally or otherwise, Bottled in Bond (“BiB”) is a legally defined small batch, defined by time, a distilling season. Long considered to be “the good stuff”, BiB whiskey isn’t necessarily good by definition, but if it is bad, there is no covering it up. It’s a straight whiskey, but it also hasn’t been blended with different barrels distilled at different times; BiB is not bad whiskey mixed with good whiskey to make mediocre whiskey. It’s either good or it isn’t. More often than not, it is good, because otherwise why sell it?

It is also important to understand that BiB bourbon was bottled at close to cask strength at 100 proof for most of its history. Federal government regulations used to require that bourbon enter the cask at no more than 110 proof. In the 1960’s this was increased to 125 proof; before that, 100 proof was pretty darn close to cask strength.

BiB bourbon of course suffered along with the rest of the bourbon industry, starting in the 1960’s and 70’s, when so called “super smooth” 80 proof spirits were all of the rage, and then the bourbon market hit its darkest days when numerous distilleries were mothballed or sold and bourbon production was being exported due to a weak American market.

However, during those times, in the early nineties when bourbon was just starting to recover its following, Evan Williams White Label Bottled in Bond was one of my staple bourbons.

As bourbon was rediscovered by the drinking public, so was Bottled in Bond.

I think the main cause of the resurgence of Bottled in Bond bourbon is Sazerac’s lawsuit against Beam over Red Stag, a cinnamon version of Jim Beam Bourbon. Sazerac sued due to possible brand confusion with George T. Stagg and Stagg Jr., and out of the negotiations to settle the lawsuit Sazerac acquired the Old Taylor and E.H. Taylor brands from Beam. Sazerac began making a series of Bottled in Bond whiskies, both bourbon and rye, under the E.H. Taylor moniker, excepting the cask strength release which would qualify for BiB but for the higher than 100 proof. These whiskies are now most sought after and allocated. But, that led to bourbon drinkers giving older BiB brand whiskies a try, but also led newer producers to produce BiB bourbon. New Riff is one such producer. The other is Laws Whiskey House in Colorado, who has released a four grain straight bourbon that has a bottled in bond expression.

One of the funny homages to history is the use of strips over the caps of BiB bourbon that are reminiscent of the old tax strips that were applied to spirits in the United States. I don’t know if the IRS got more lax in whiskey tax collection or got so good at it that tax stamps on bottles of whiskey fell out of disuse, Old Fitzgerald, Col. E.H. Taylor, and A.D. Laws all use these faux tax strips for an old school feel. 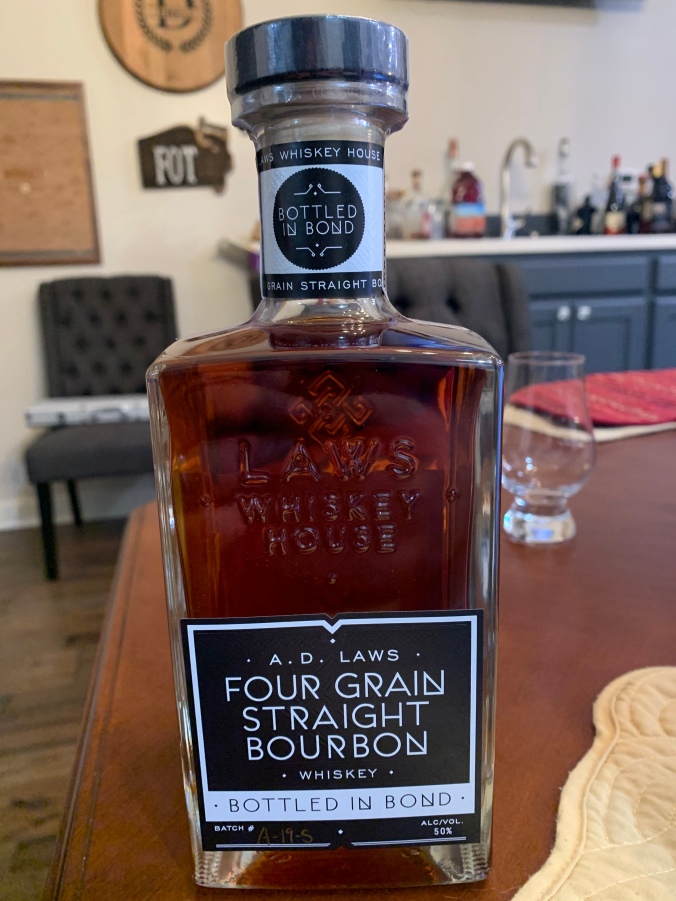 Laws Whiskey House is a distillery in Denver, Colorado, that prides itself on the use of locally grown grains, open air sour mash fermentation, and, despite being a new bourbon producer in Colorado, making bourbon the old school way. While the bottle indicates that it is four years old because of the BiB labeling, the website notes that this whiskey is in fact six years old, with a mashbill of 60% corn, 20% heirloom wheat, 10% heirloom rye, and 10% malted barley.

My first question about this bourbon was whether or not the Colorado climate, which tends to be cooler than Kentucky, would give this bourbon enough heat in the summer for the bourbon to appropriately age. While I once was in Denver during a Kiwanis Convention in the summer, and yes, it was quite pleasant and warm, I still wondered if the barrels would inhale this whiskey enough during the summers to give it the right amount of barrel influence.

I can say after trying this whiskey that yes, you can age bourbon in Colorado and age it well.

On the swirl you can tell this is a well made whiskey; nice thick film and long legs. The color is a nice deep amber for a six year old bourbon. The nose is very traditional bourbon, vanilla, caramel, light oak, followed by fruitiness – raisins and apples, definitely nothing tropical. On the palate, the whiskey has a very nice mouthfeel, particularly for the age. Medium full bodied; not thin at all. On the palate, rich flavors of vanilla turn to herbal tea with raw honey, Luxardo cherries, with an interesting savory briney note. The finish can best be described as cherry Altoids (gads I miss those), some oak, grains, and some craft bitterness.

Quite the flavor ride for a craft bourbon. After the finish fades, I can really taste the grains on this; almost like you can taste the malted barley on some scotches. A.D. Laws obviously takes such pride in their grains that they make sure those flavors are front and center.

This is definitely one of the most intriguing craft bourbons I have ever tried. Yet, it is old school Bottled in Bond, which for me gives it a cool factor – a new producer going old school.