Hokus Pokus has two more Russell’s Reserve Single Barrel Picks, these being Kentucky Ghost I, A Toast to Family, and Kentucky Ghost II, A Toast to Homecoming. Wild Turkey makes some of the best bourbon you can buy so long as it is non-chill filtered. I won’t go on again about how I wish I could take a baseball bat to the chill filtering machine at Wild Turkey that ruins some of the world’s best bourbon. Kentucky Ghost’s II’s sticker is signed by Bruce Russell, who serves as the third generation Russell working there, albeit as a brand ambassador rather than a distiller. But I am pretty sure this is the only three generation family working for a single distillery. Bruce is on both labels, one by himself and one with his Dad and Grandfather.

Both of these are 9 years and 11 months; not sure why they pulled them one month early, except that Russell’s Reserve Single Barrel is non aged stated whereas regular Russell’s Reserve bourbon is ten years old. The funny thing is these were dumped at nine years old and bottled at ten; so let’s just call this ten year old bourbon, shall we? In any event, I bought a standard bottle of Russell’s Reserve Single Barrel for my Mardi Gras Krewe ball last weekend, so I have recently been drinking this and so can really compare these Hokus picks to the standard release. 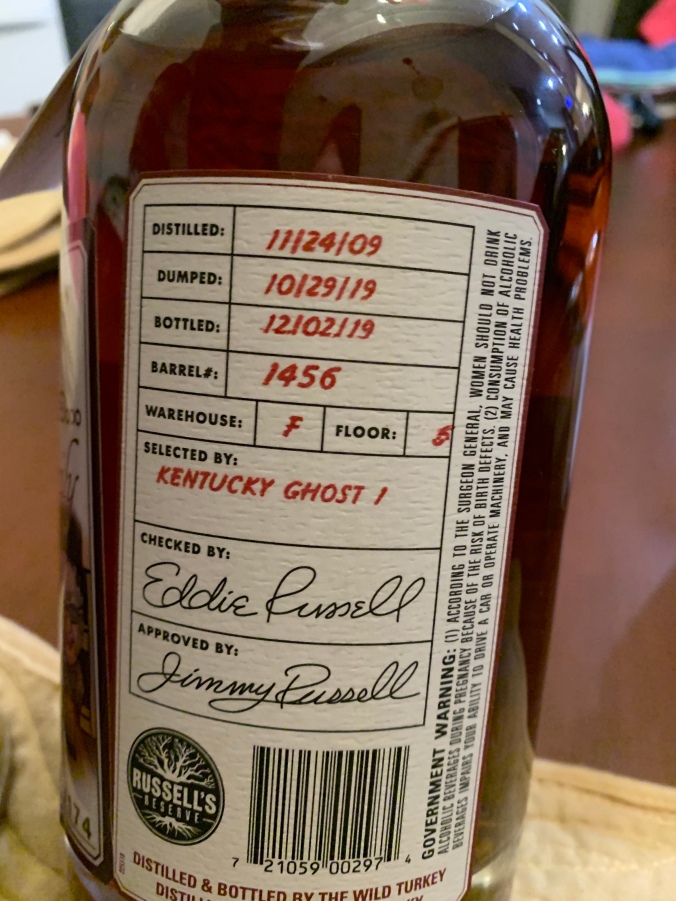 Kentucky Ghost I – a nice medium amber color, with thick legs on the swirl. Oily. Slightly musty and lightly oaked on the nose, with some slight vanilla notes. On the palate, the typical cherry notes in this bourbon are rather muted; instead, there is some nice vanilla and herbal rye. A very traditional bourbon flavor profile that crescendos to cinnamon on the finish. Very nice bourbon, and the carefully balanced sweet, rye, and oak influences are quite impressive.

Kentucky Ghost II – nice film with thin legs on the swirl; color is a nice amber with some mahogany flecks. Delightful sweetness on a very traditional bourbon nose; a little oak in there. On the palate, medium mouthfeel but OH MY GOD the cherry notes are super heavy. I love that in a bourbon. That leads to this really nice toasted oak with slight vanilla and cinnamon on the finish. The bottle that Bruce signed is really excellent.

What really gets me is these two barrels were distilled the same day, the barrels put in the same warehouse, same floor, and same rick, pulled, dumped, and bottled all on the same dates.

And yet they are night and day different as far as flavor. Kentucky Ghost II had a slightly lower bottle yield – 6 bottles less – so it had a little bit more evaporation, for whatever reason. But that led to a lot more barrel influence in my opinion. But, it was slightly thinner on the mouthfeel, so it was proofed down slightly more to get to the standard 110 proof.

You should definitely go bug the managers at any of the Hokus Pokus locations to sell you one of each of these bottles. Comparing the two is quite an experience. I would also say Russell’s Reserve Single Barrel standard releases generally fall somewhere between the two extremes of these bottles. But, I really love the extremes. 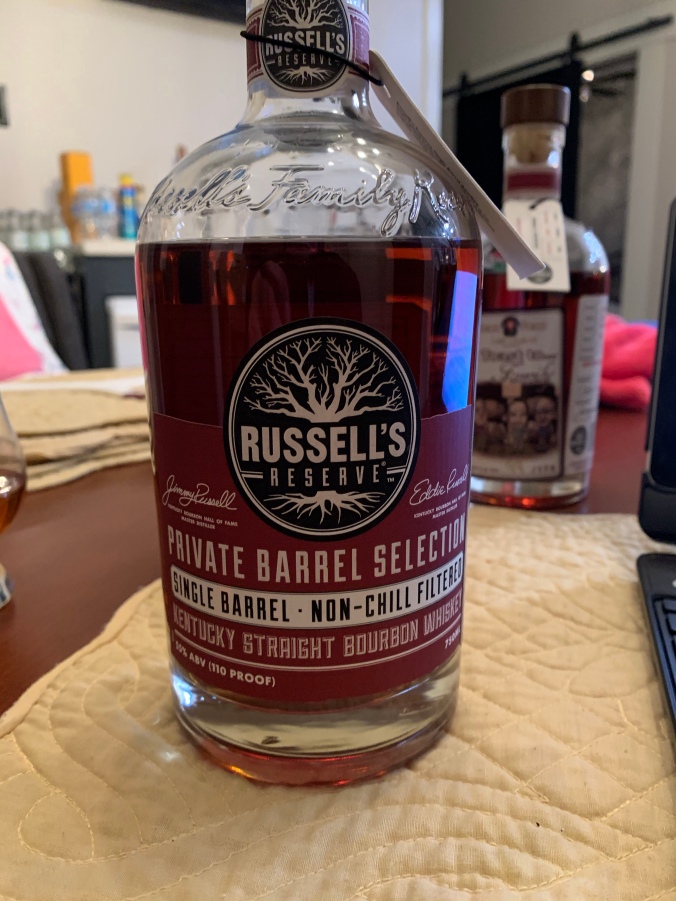