Well, it is Mardi Gras time again in Louisiana. Which, for me and Catherine, means Mardi Gras balls. We get dressed up for these black tie affairs only to find subpar bars with Jack Daniel’s Black Label and Dewar’s Blended Scotch. So, typically, Cat and I sneak in a good bottle of scotch and bourbon. 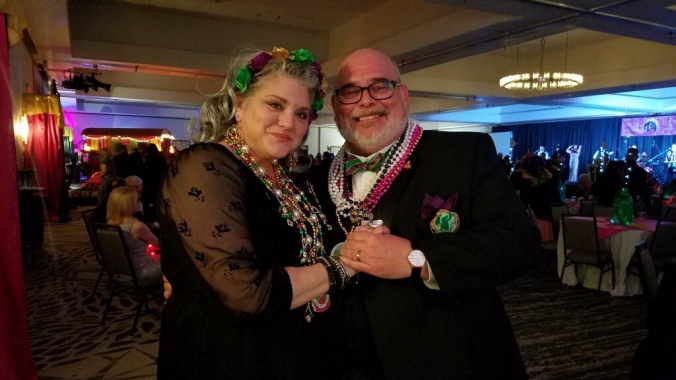 So, this year I decided to sneak in 1792 Full Proof, which I opened at a pre-party and brought in. But the Krewe of Twelfth Night, my wife’s Krewe and the Krewe of the Gypsies (thus my wife’s wig and outfit) had a top shelf bar that included Buffalo Trace and Monkey Shoulder, a delightful blended malt scotch from the wonderful folks that make Balvenie. So, I drank their whiskey that night, and the Krewe gets my award for best bar at a Mardi Gras Ball ever.

But, back to the bottle I snuck in. 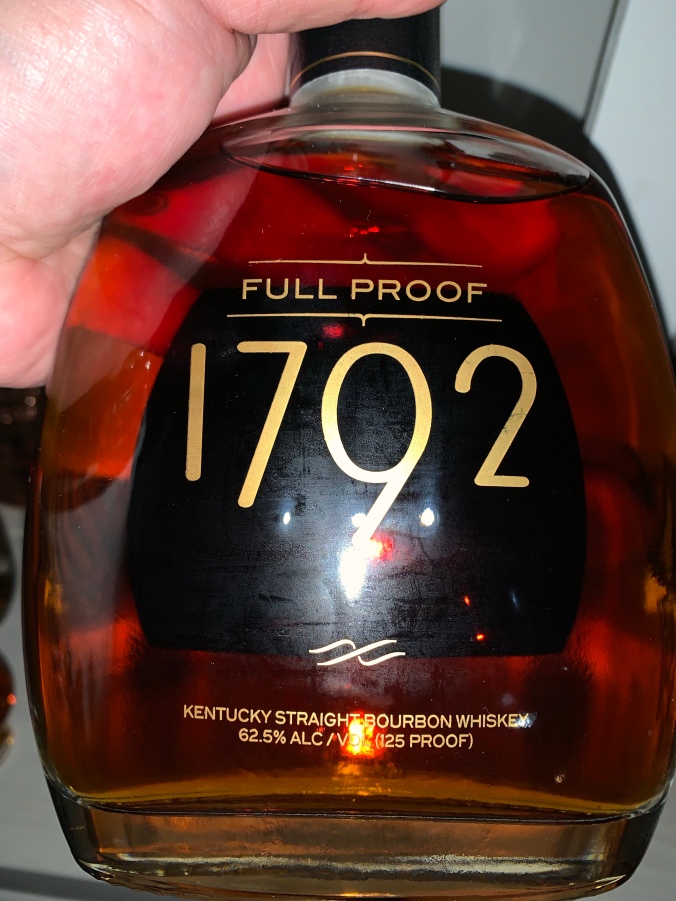 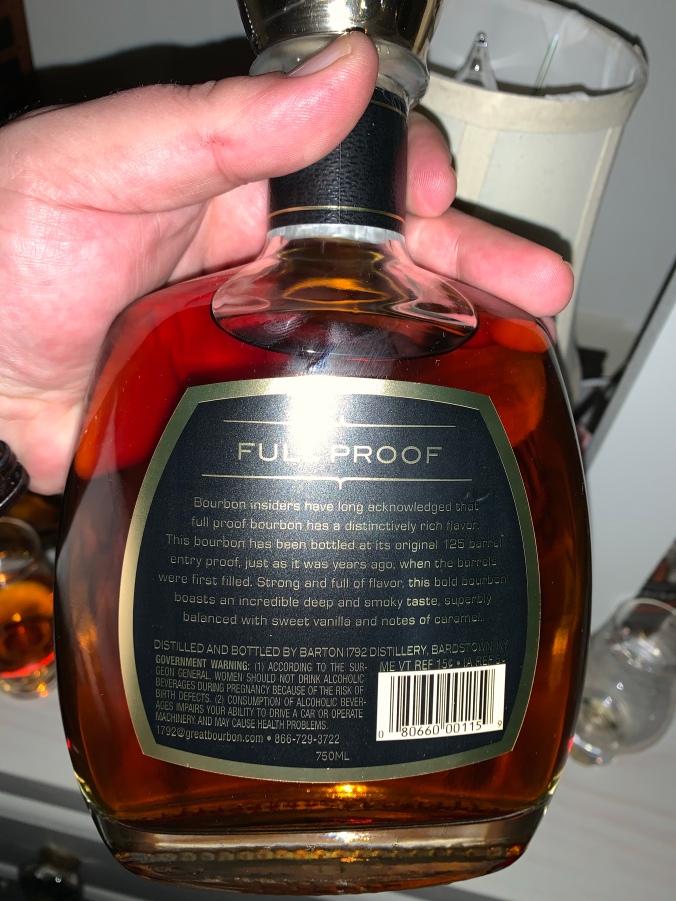 1792 Full Proof is bourbon made at the 1792 Barton Distillery owned by Sazerac out of New Orleans. It is Buffalo Trace’s sister distillery, and just like with Buffalo Trace, when they bought this distillery they came up with a new line of whiskies with a different mashbill than was traditionally made at the distillery. 1792 is therefore a relatively new bourbon brand.

I have reviewed a number of the 1792 bourbons in the past. However, I haven’t reviewed the Full Proof on this blog, although I did review it on Facebook prior to starting this blog. 1792 Full Proof has gained a certain notoriety of late since Jim Murray named it his World Whiskey of the Year. For a lot of bourbon commentators, the reaction to Murray on 1792 Full Proof have ranged from he was bribed to WTF, like when Murray named Crown Royal’s Harvest Rye Whiskey as his top pick one year.

Now, I disagree with Murray on a lot of his opinions, and this bourbon is not the best bourbon I have tasted over the last twelve months, I am glad I gave this bourbon another look, because it is amazingly good, pretty available, and a steal at $45. 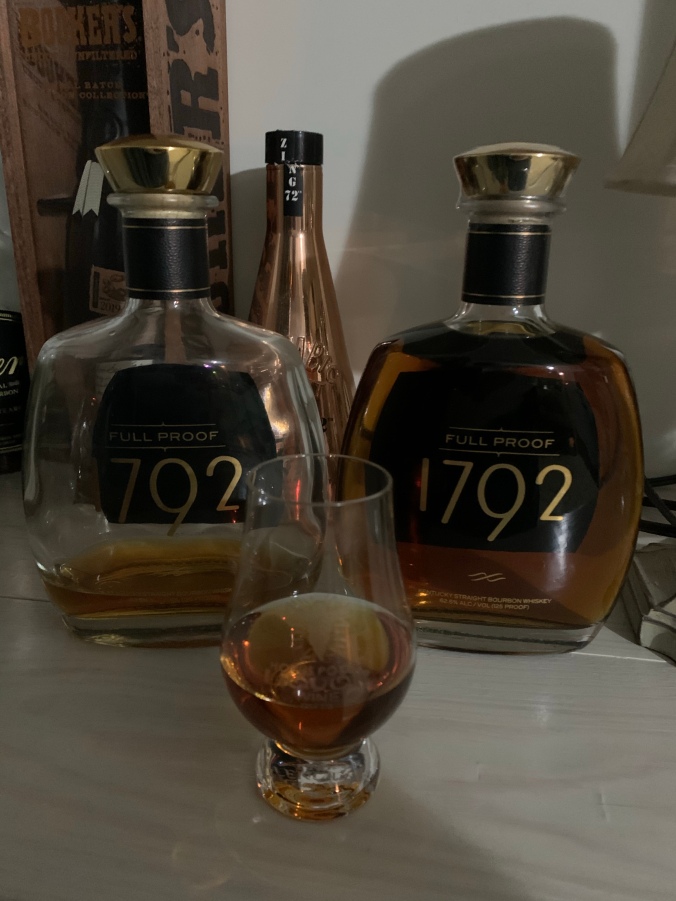 Between the ball pre-party and the College Football Championship Party I threw Monday night, between me and all my friends the bottle on the right of the above picture is bottle number three. It’s been a hit. Bottle number 1 wasn’t going to make it through Monday night football so I bought two more before the game. Finishing off bottle two for this review.

This bourbon is 125 Proof, which is its barrel entry proof. Close to cask strength but watered down just a tad for consistency. Based on the amber color, this bourbon is likely six to eight years old.

On the swirl is a thick film with thick legs. The nose reveals dark corn syrup, vanilla, and herbs. On the palate, the corn syrup and vanilla give way to dark chocolate, caramel chews, with this delightful herbal rye spice that acts like a backbone to this bourbon with a hint of oak. The finish lingers and the cinnamon notes from the barrel and raisin flavors fade in and crescendo nicely. Nice mouthfeel.

The last time I tried this bourbon it was a Hokus Pokus barrel pick and the raisin notes were pretty heavy on the finish. It made it unique and different. This standard release is much more traditional bourbon profile, and I get why Jim Murray is raving about this whiskey.

Does this whiskey really beat out William LaRue Weller, George T. Stagg, Pappy, Old Fitz Bottled in Bond, or the other so called unobtainable bourbons our there? No, Jim Murray, it doesn’t.

When Murray named Crown Royal Harvest Rye as World Whiskey of the Year, people asked is that really the one bottle of whiskey he would want to be trapped on a desert island with? I asked the same thing. But if you were to reframe the question to ask, you are trapped on a desert island and you can have either one bottle of William LaRue Weller or a case of 1792 Full Proof, which would you choose? Well, that makes sense and that really is the reality, sans desert island. 1792 would be my pick.

Maybe Murray sometimes is trying to remind us all that not all the great whiskies of the world are these insanely hard to get limited releases, but are sitting right there at our favorite liquor store.

I would agree with Jim that 1792 Full Proof is that. I bought three bottles over the last week and they gave me and my friends much joy as we celebrated the beginning of Mardi Gras and LSU’s national football championship.

Or, maybe Jim Murray is just a whiskey nerd in a white hat who does random stuff sometimes and he picked 1792 Full Proof as World Whiskey of the Year just to mess with the whiskey world.

Either way, 1792 Full Proof is worth picking up a bottle. Or three.

One thought on “The Bottle I didn’t need to sneak into the Twelfth Night Mardi Gras Ball: 1792 Full Proof”