I haven’t blogged in the last two weeks; call it an unintentional Mardi Gras break, with my Krewe’s ball two weekends ago, and then the actual weekend which culminated in the tour de drunk through South Central Louisiana – Mamou, Eunice, Crowley, then back to Eunice – old school South Louisiana Mardi Gras. I’ve been drinking a good bit of bourbon, but I just haven’t had the time to write about it.

And I do have to say the Cohiba Dominicana Puro was an amazing cigar to have after lunch Tuesday with some 1792 Bottled in Bond Bourbon while watching Jamie Bergeron play in Crowley. 1792 is not have a good time lately – warehouse collapse last year, spilled a bunch of mash this year; but 1792 BiB is great bourbon.

Also, last Saturday night, I hosted a bourbon tasting at the Levee bar at the Downtown Holiday Inn in my home town. This bourbon tasting was an auction item for a fundraiser for a local Montessori school; it came with five bottles of bourbon and tapas paired with the same, and yours truly picking the bourbon pairing them with the tapas, and talking about the bourbons at the tasting. Yes, someone paid money to drink with me and I have already been asked to volunteer again to do this again next year. Here is what we tried and the tapas pairings:

1792 Bottled in Bond: Boudin (Cajun sausage and rice) Wantons with Steen’s Cane Syrup, with some crumbled pork cracklins inside

The entire thing was amazing, but for me the highlights were the lamb chops and the bread pudding. Woodford Reserve Double Oaked (and, more particularly, the Hokus Pokus store barrel picks) really pairs well with meat and for me is like a cab alternative for pairing with beef and lamb. It has just the right amount of sweetness and oak. It’s 90 proof so you can have a little bit without getting sloshed. I am patting myself on the back as a Certified Bourbon Steward for making that pairing. On the other hand, pairing Booker’s with white chocolate bread pudding is a totally Captain Obvious move. You don’t have to be a certified anything to know that would be good. But I have to say it was awesome and was a nice crescendo to the evening.

The Levee did a great job with the whole thing; the food was timed perfectly and they provided mini brandy snifters that did the job as far as being able to nose and taste the bourbons. For my Alexandria friends, the bar is well stocked and they have great tapas.

So, my wife picked me up a bottle of Bird Dog Ten Year Old Bourbon, which proclaims itself to be “Very Small Batch”, which means next to nothing legally or otherwise. So this is a ten year old ninety proof bourbon; hopefully it is on par with Eagle Rare and the like. The label says “Kentucky” on it, so I am betting this is some ten year old Heaven Hill sourced bourbon. I haven’t picked this one up myself largely because Bird Dog specializes in flavored whiskies which is not my thing. My expectations are not terribly high for this bourbon. 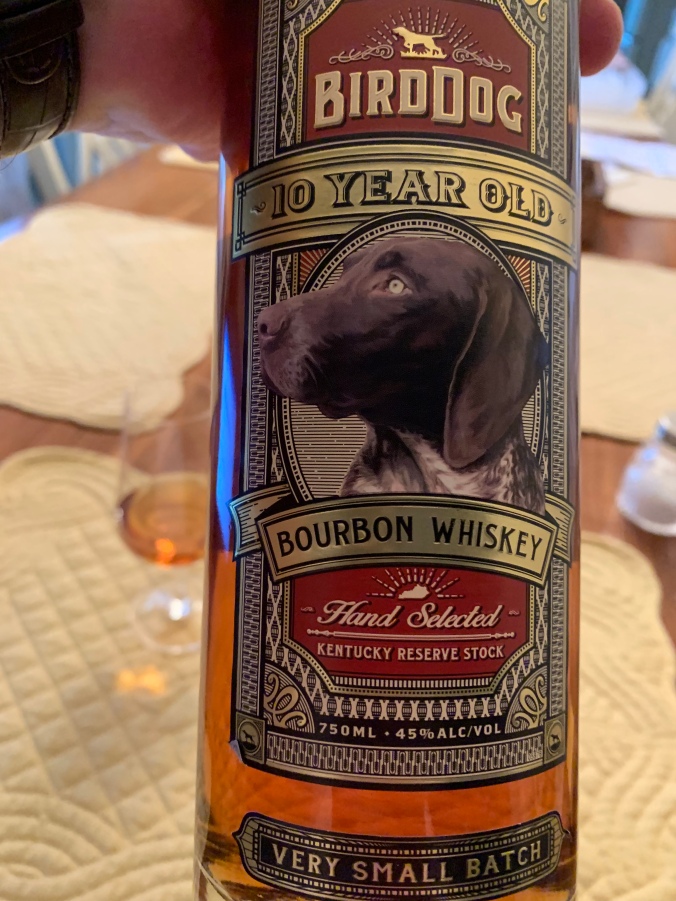 Color is strawlike so I think this whiskey was probably proofed down significantly. Medium legs. Nose is decent; some oak and nice vanilla; some caramel. On the palate, I am pleasantly surprised. Oak, cinnamon, vanilla, caramel, with a slight pinch of Angostura bitters. The finish is heavy on rye spice. For a ninety proofer it has a surprising amount of flavor. Color me shocked. Really.

I decided to taste test this against Bower Hill barrel reserve, which is an 86 proof sourced Heaven Hill Product. You know, trying to compare like with like, although Bower Hill is aged at Luxco in Louisville rather than Bardstown where most Heaven Hill stocks are aged. They are at similar price points; about $35-$40 a bottle. 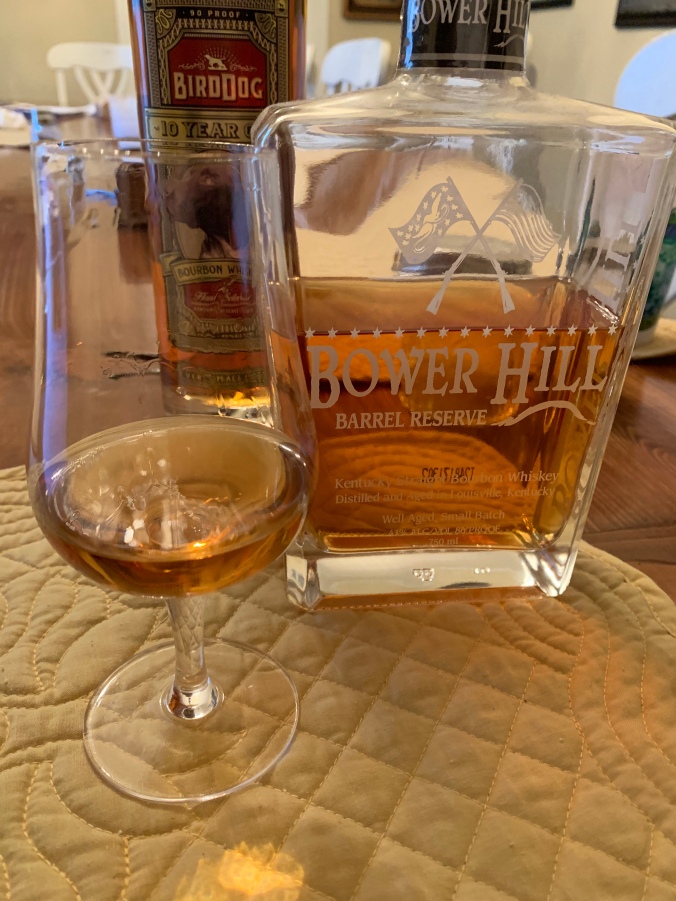 The Bower Hill has far less oak, and really has more of a caramel candy taste to it. A little bit of Yeast Funk on the end. I think the Bird Dog is a lot better.

Again, I am as shocked as anyone that Bird Dog 10 year old is that good.

In any event, I am going to try to get back on my routine of blogging once a week. I have a backlog of whiskies I need to try and review. But, Lent, thankfully, will be quieter and give me more time to do that. Slainte.