The internet has been a buzz with a new release from Luxco, the makers of Rebel Yell, Blood Oath, and other whiskies currently distilled at Heaven Hill but aged in Luxco’s warehouses in Louisville and Bardstown, Kentucky. One of their line up is Ezra Brooks, a bourbon I tried a very long time ago in a plastic handle and I remember I didn’t like it very much. So, I haven’t bothered to try it again. However, this latest release of Ezra Brooks, Old Ezra, a 7 year old cask strength bourbon, is attempting to move the brand to the middle shelf. 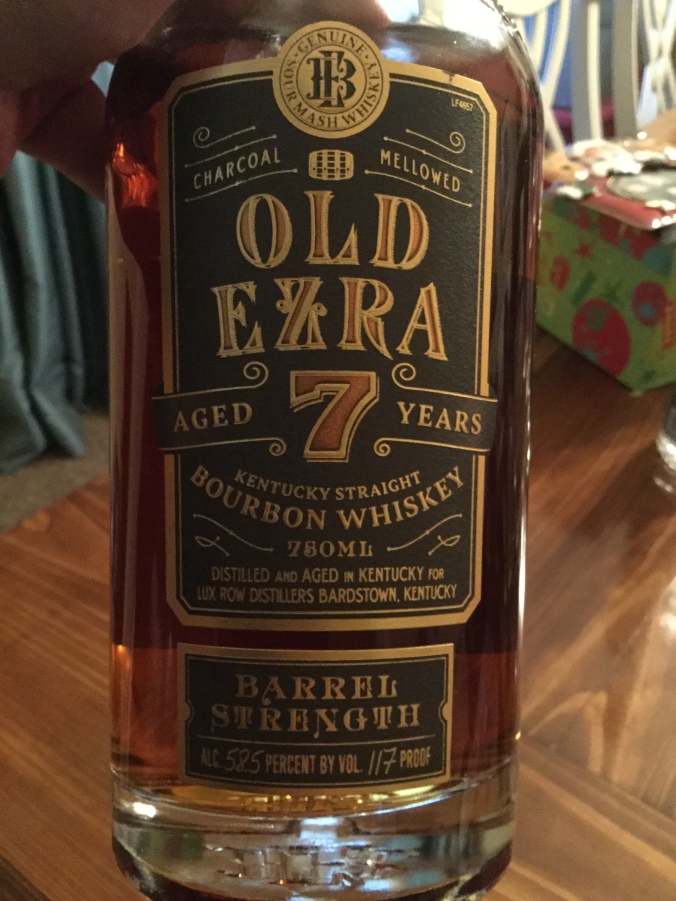 At $39 for a 117 proof cask strength bourbon that is aged seven years, which is about the average age for Booker’s, bourbon groups have taken notice of this release.

So, among the Christmas decorations that have been pulled from the attic, I decided to try Old Ezra. The color is more reddish than I would expect for a bourbon this age, so that’s good. Nice thin oily film on the swirl. Nose is classic bourbon, with nothing off-putting – vanilla, rye spice, very classic. On the palate, this has a very decent mouthfeel, some corn sweetness up front followed by rye spice, but then it turns a little bit bitter, with a flavor I remember from the regular Ezra Brooks I tried a long time ago. However, my palate has changed over the years and after drinking a lot of Old Fashioneds and Manhattan’s and even Sambuca from time to time, the bitterness is not off-putting. It’s like some bartender created anise flavored bitters and that was added to this bourbon. After exposure to some air, the anise gets tempered and a little cinnamon shows up in the nose and on the finish. Much better. In fact, each sip gets better and the flavors more complex as the anise and cinnamon mix it up on the finish. Intriguing actually from a flavor perspective.

I had my wife Catherine taste this. Her reaction was a little different. She found it to be floral on the front, she got the Sambuca note I pointed out, but she felt it finished with citrus. Then again, her palate is far more geared to floral and citrus scotches. But, yes, she’s right, as always, there is a grapefruit note at the end; bitter, citrus, refreshing. She really likes this one.

As an aside, one of the funny parts of my whiskey life is my wife. She knew nothing about whiskey when we met. I took her to Scotland on our honeymoon. That changed everything for her. What is really sad is that I have been drinking whiskey all of my adult life, have studied it, written about it, got the Certified Bourbon Steward certification, I try, taste and compare so many different whiskies. In other words, I really try hard at this whole whiskey aficionado thing. But ever since Scotland, my wife can pick up a dram of anything and come up with complex tasting notes like it’s just nothing. My palate is far more broad, accepting, and even forgiving than hers; I am always looking for some redeeming characteristic in what I am trying. My wife, not at all. She either likes something or hates something and is quick to tell you. She will also pick up notes on whiskey that will utterly elude me until she points them out. It’s like Salieri dealing with Mozart. Studied talent versus natural talent.

At the price point, I wish this was a cask strength bourbon I could tell folks new to bourbon to just go buy and try. But it’s a complicated bourbon on the palate so I really can’t go there. Appreciating this bourbon requires a tad of patience to let it open up. For connoisseurs out there, yeah, you shell out the forty bucks for this just to explore it. You should give a lot more credence to my wife’s tasting notes than mine.