It has been hot in Central Louisiana lately, but for some reason this evening has a nice breeze. A perfect evening for some back porch sitting watching the sun go down with a good bourbon and a nice cigar by your side.

Earlier this year I reviewed Redemption 10 year old high rye barrel proof bourbon. I liked it a lot. So, I thought I would give the low rye bourbon a tried. As I have noted before this is MGP whiskey, and so I am hoping this might be reminiscent of Smooth Amber Old Scout Single Barrel.

This one is nine years old and comes in at 108.2 proof, in a really cool bottle.

So, in the cask strength bourbon world, this proof will make it a bit of a softy. 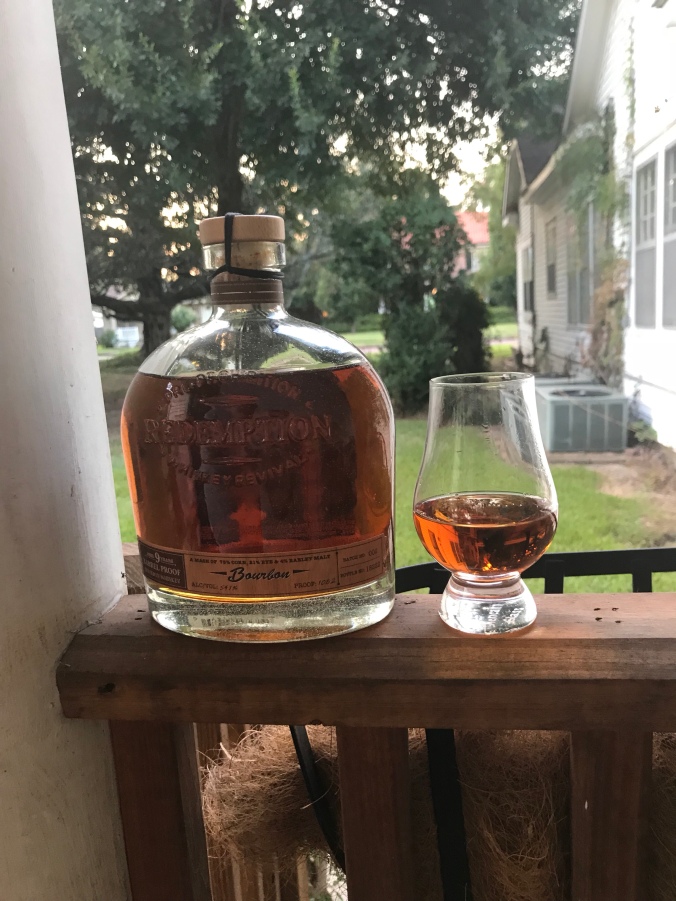 Color is a very respectable amber, and when swirled it leaves more of a sheet than legs. On the nose, a lot of sweet corn syrup, a little floral, with some herbs. Raw vanilla then comes to the fore.

On the palate, the sweet corn syrup turns down in favor of vanilla. rye, tarragon and rosemary. Definitely an interesting and complex profile. This turns to oak and cinnamon on the finish. I haven’t lit my cigar yet, but this bourbon has a nice herbal earthiness coupled with sweetness which has me adding the tasting note to this one of “really good cigar”, but lighter than that. Mouthfeel is medium to full bodied. The finish keeps on going for a while and gradually fades like a decrescendo in classical music that stretches over a couple of bars.

I think I like the high rye version better, but this one is very good.

You know what is really great about this bottle and it’s high rye brother? It’s not allocated at Hokus. When I went by Saturday to get it, I had them searching the office (as usual) for it as I thought Hudson had set it aside for me. Nope. Both bourbons were both on the bourbon barrel in the middle of the store. Really good stuff and gettable for the moment. Hudson tells me most folks don’t know about these bourbons so he just put them out there. But once people try them that won’t last.

And yes, this bourbon pairs well with a Cohiba Nicaragua. This one has been aging for about eight months in my best humidor where I keep my Cubans. The cellophane has started turning brown. This particular humidor I have had settled in at 75% humidity with very little maintenance at this point. It does nice things to cigars over time.

And that all makes for a nice Sunday evening.