On National Bourbon Day, Ken Brown brought a bottle of Blood Oath Pact IV over to be part of the festivities. While I reviewed it at that time, this bottle really deserves it own post. Lucky me, a client who was pleased with my legal work bought me a bottle at my local. I didn’t know Hokus even had this, and Hudson Funk was without explanation as to why he hadn’t mentioned this bottle to me in the glass case up front, given that I get stuff that never makes it to the glass case. So, call it fate or karma, a client could buy me a terrific bottle I didn’t have.

Blood Oath is a limited release bourbon by Luxco, dba Lux Row distillers. Luxco’s primary source of Bourbon is Heaven Hill, but they have their own Louisville warehouses to age the whiskey. So they aren’t a standard non-distiller producer. They are aging their own stocks. Given that after the fire Heaven Hill was in the same position until they bought Bernheim, and given that the still matters less to bourbon than barrel and mashbill do, this really is Luxco whiskey. Also, Bower Hill, one of my NDP favorites, sources their whiskey at Luxco.

Luxco’s flagship whiskey brand is Rebel Yell, an old wheated bourbon brand that used to be part of the Van Winkle stable. I haven’t ventured to try the new Rebel Yell.

Ok, and looking at the bottle, I realize it is the same elegant rectangular bottle used by Diageo for its Orphan Barrel Series. 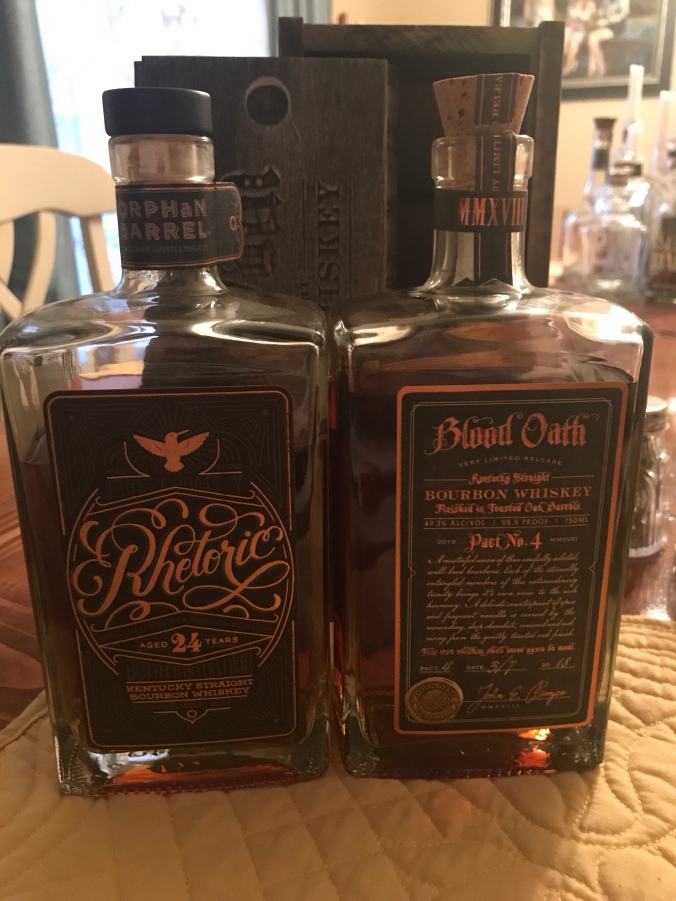 So, enough background. At $120 a bottle at 98.6 proof, Luxco is clearly aiming at the aged but not barrel proof segment occupied by Pappy Van Winkle, Jefferson’s Presidential Reserve, and Orphan Barrel. Pact IV is a blend of three straight bourbons, a twelve year old, a ten year old, and a nine year old finished in toasted barrels.

The color is golden amber with a wonderful mahogany tinge provided by the barrels. Big, thick, oily long legs despite not being cask strength. Nose is classic bourbon but with notes of allspice and anise. Mouthwatering. Just lovely. On the palate, corn sweetness, herbal rye spice, a little blood orange, which then turns to cinnamon and anise on the finish. True confession, when I tried this before I was less than sober. This whiskey has a ton of complexity you will miss if you have already been drinking, much like Glenmorangie Signet in that regard. I completely missed the anise notes during the prior tasting.

This is certainly an after dinner whiskey that would go well with a cigar. Just don’t drink too much before dinner as you might end up missing a lot of what this bourbon has to offer. Definitely a bottle for the discerning Bourbon connoisseur’s bar.

One thought on “Blood Oath Pact IV: A more detailed review since a client gifted me this wonderful bottle”