I am very lucky that in the small city in Louisiana I call home we have Hokus Pokus.  The owner and the store manager aim to bring top shelf bottles to Alexandria.  One of the ways they bring top shelf whiskey in us to buy whole barrels of certain whiskies and have them specially bottled. In the last two years Hokus has had single barrel selections of Buffalo Trace, Eagle Rare, 1792 Full Proof, Jefferson’s Reserve, and Elijah Craig.  Hokus Pokus has two other locations in Lake Charles and Baton Rouge to help shoulder the burden of selling all that whiskey, and that’s definitely a good thing.  Because otherwise, I would not have all that good whiskey to buy at my local store.

What’s crazy about single barrel bottlings of mid-shelf whiskeys is that you often end up with a top shelf bottle for a mid shelf price.  Hokus Pokus’ single barrel Buffalo Trace has been amazing; it is essentially 90 proof George T. Stagg or Stagg Jr.  I bought a case last year, and, now having tried this year’s, I am buying another case.  Hokus’ 1792 Full Proof Single Barrel is also amazing; I traded a bottle to a friend in Texas for some Weller 107; he had a bottle of the standard issue and 5 other single barrel selections sent to other stores and he said Hokus’ bottling was one of the best.  Many of the liquor stores I know of didn’t even get any 1792 Full Proof, much less a single barrel edition, and this is a whiskey that was off the charts as far the rating in Jim Murray’s Whisky Bible.  I bought a bottle of Eagle Rare Barrel Select from Martin Wine Cellar in New Orleans when I was down there in January; it was the most easily quaffable Eagle Rare I ever had.  I kept the bottle just to remember it. 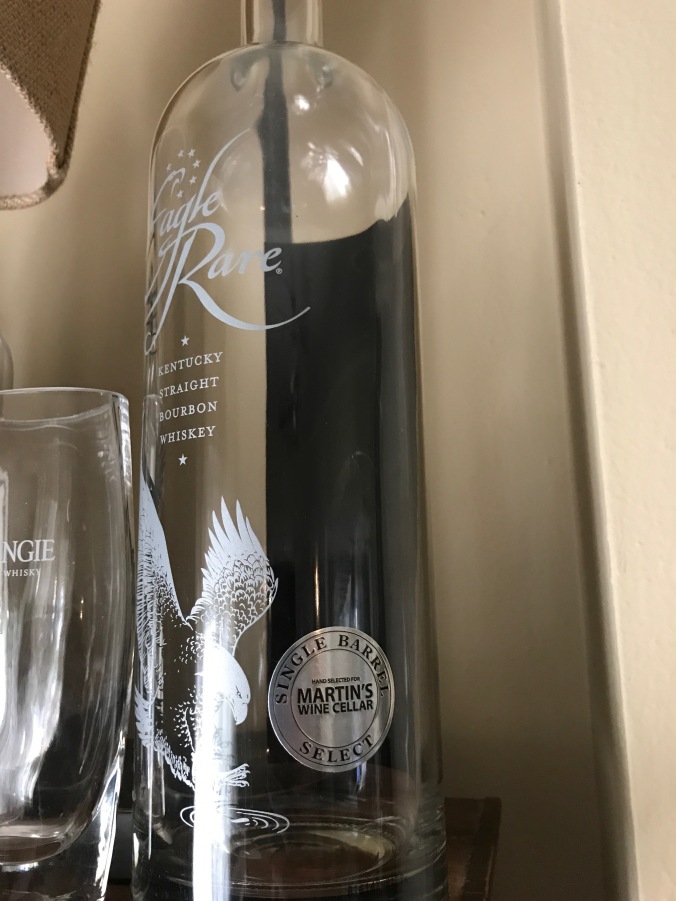 The other point to realize about single barrel store bottlings is that if your store is getting those in, they are buying enough quantities of whiskey to get bottles of the heavily allocated bourbons and ryes, like Pappy, Buffalo Trace’s Antique Collection, Willett’s, Parker’s, Orphan Barrel, and others.

However, not every single barrel bottling is all that; I bought a Jefferson’s single barrel pick from Martin’s and it was no where near as good as Hokus Pokus’ barrel pick from the year before. Individual palates of store owners and employees are involved.  However, more often than not the single barrel selections are excellent, and even if there are only par with the usual stuff, you are still increasing the store’s, and therefore your, chances to get the really good stuff.

For all my Louisiana friends, I have recommendations where to shop wherever you are to get the good stuff, except for Shreveport where the Hilton bar is my mainstay:

Hokus Pokus, Alexandria, Lake Charles, Prairieville (Baton Rouge), LA – The Ghost with the Most.  Enough said.  You all see what I drink on this blog and on Facebook; it’s all 95% Hokus Pokus.   Gus Olah, Hudson Funk, and the rest of the crew bust their collective butts to make sure they have an amazing selection of bottles.  Hokus Pokus has been famous for a long time in this regard; they have a grandfathered distributor/retailer license and they were hand selling Blanton’s to people in the 1990’s before everyone found out about how good it was.  They get amazing allocations of stuff in the Alexandria store and that is no accident.

Kerry’s, Mansura/Marksville, LA – it’s down the street from my wife Catherine’s work.  While they don’t have single barrel store picks, their selection is amazing for a former gas station in small town Louisiana.  Want some Balvenie of some particular wood finish, High West, Woodford Reserve Brandy cask finish, Glenmorangie 18 (not to mention two 1.75’s of Glenmorangie Original we bought there – I didn’t know they came in that size until I saw it there), or even Elmer T. Lee?  Yeah, they got that and if they don’t they will try to get it.  They don’t get Pappy or BTAC releases because they are too small, but they have a great selection.  They bought me and Catherine a ham last year at Christmas.  Ok, so maybe we spend too much on booze.  Maybe.

Maddie’s One Stop Package, Simmesport, LA – a store located in the armpit of the world that will sell you a bottle of Weller Anitque 107 for $80 because my loving wife bought me one for Father’s Day.   They do get an allocation of Pappy every year.  Nice folks and whenever I walk in there I am just amazed at what they have considering where they are, even if overpriced.

Tonore’s, Monroe, LA – they sold me my first bottle of Orphan Barrel, which was Barterhouse, and recently supplied me with some Weller 107.  I don’t know if they are doing barrel store picks, but still worth stopping by.  The owner is a great guy and Monroe is luckily to have a place like this.  I haven’t been to Washington Wine & Spirits up there, which is associated with Doe’s Eat Place, and I need to check it out because Doe’s has a great whiskey selection, but Tonore’s is old school, and I like that.

Marcello’s Wine Shop, Lafayette, LA – I visit there when I have court or other engagements down there; I bought a bottle of Orphan Barrel Rhetoric and 1792 High Rye from them because Hokus didn’t have it.  Really nice folks, and while they don’t get the allocations Hokus does, it’s the best store in the area from all accounts.  That, and those Coon Asses down there are not as nutty about Weller Special Reserve as they are in Central and North Louisiana; they always have it so sometimes I stop by there just to get that.  They only get small allocations of Pappy, BTAC, and EH Taylor special releases, but at least they get them.

Martin Wine Celler – New Orleans, Metairie, other locations – a famous wine and liquor shop in New Orleans.  Best part is they have a website so you can search what they have before you go.  That’s how I found the Eagle Rare Single Barrel Select bottle pictured above.  Very knowledgeable staff.  I am not a frequent enough customer to really be part of the in crowd at this store, but old money uptown New Orleans folks shop there enough so even a technical nobody can get a unique bottle down there.

Yes, my Louisiana friends, avoid the temptation to buy your booze at a gas station, Wal Mart, or large chain grocery store, because in Louisiana, liquor is everywhere, even in drive thru’s.  Yeah, it’s a pain sometimes not to just pick up something palatable or even fairly good at Kroger or Wal Mart, but that doesn’t hold a candle to what a dedicated local liquor store has.  Beyond the bottle of Pappy or a Christmas ham once a year, there are friends inside that store that may point you to something you might not have tried before: the store’s own single barrel bottling of your favorite bourbon, an amazing yet reasonably priced red wine, or a growler of amazing ale. The more cool stuff you buy from places like that, the more cool stuff shows up, and the people that work there actually care, a last bastion of personalized service in an Amazon world.

2 thoughts on “Shop Local For Whiskey”