In The Bourbon Future, Part I, I made a number of predictions about the future of Bourbon, which I believe to be very bright indeed. One of those predictions is:

“The consumer will drive the market, and they will know exactly what they are getting when they buy a bottle, or a case, or a barrel. They will be able to find out where the corn, rye, wheat, and barley that went into their whiskey came from, and it will all be non-GMO and certain producers websites will brag on the terroir (aka the dirt) of the grains from which their whiskey came, much like a bottle of champagne or fine French wine does today.”

In the earliest days of bourbon, farmers would mash, ferment, and distill the grains they grew themselves to make whiskey. Over the years, this evolved into efficient industrial distilleries that produce whiskey on a huge scale by comparison, and source their grains from elsewhere.

Now, with the bourbon boom which is more of a boom of demand than supply, and the premiumization of bourbon, producers now use the smallest of details to set themselves apart from the competition. Additionally, following the farm to table philosophy that is so prevalent in gourmet food today, a new movement in the bourbon world has taken hold, grain to glass.

Whistlepig, which produces rye whiskies, was an early adopter of grain to glass philosophy, and their Farmstock Rye whiskey is an example where a producer is growing their own grains, then mashing, fermenting, and distilling on site. But, even large producers like Buffalo Trace are entering the fray; Buffalo Trace’s recent purchase of a large farm, where they are building rickhouses but are also growing custom grains for making specialized bourbons is a sign of things to come. High Wire Distilling in South Carolina is using an heirloom corn they grow to make their bourbon.

Moreover, certain smaller producers are making bourbon along the model of a vineyard and winery. They grow their own grains, turn it into bourbon, and, in one case, turn around and feed the spent mash to the cows and sell the beef. 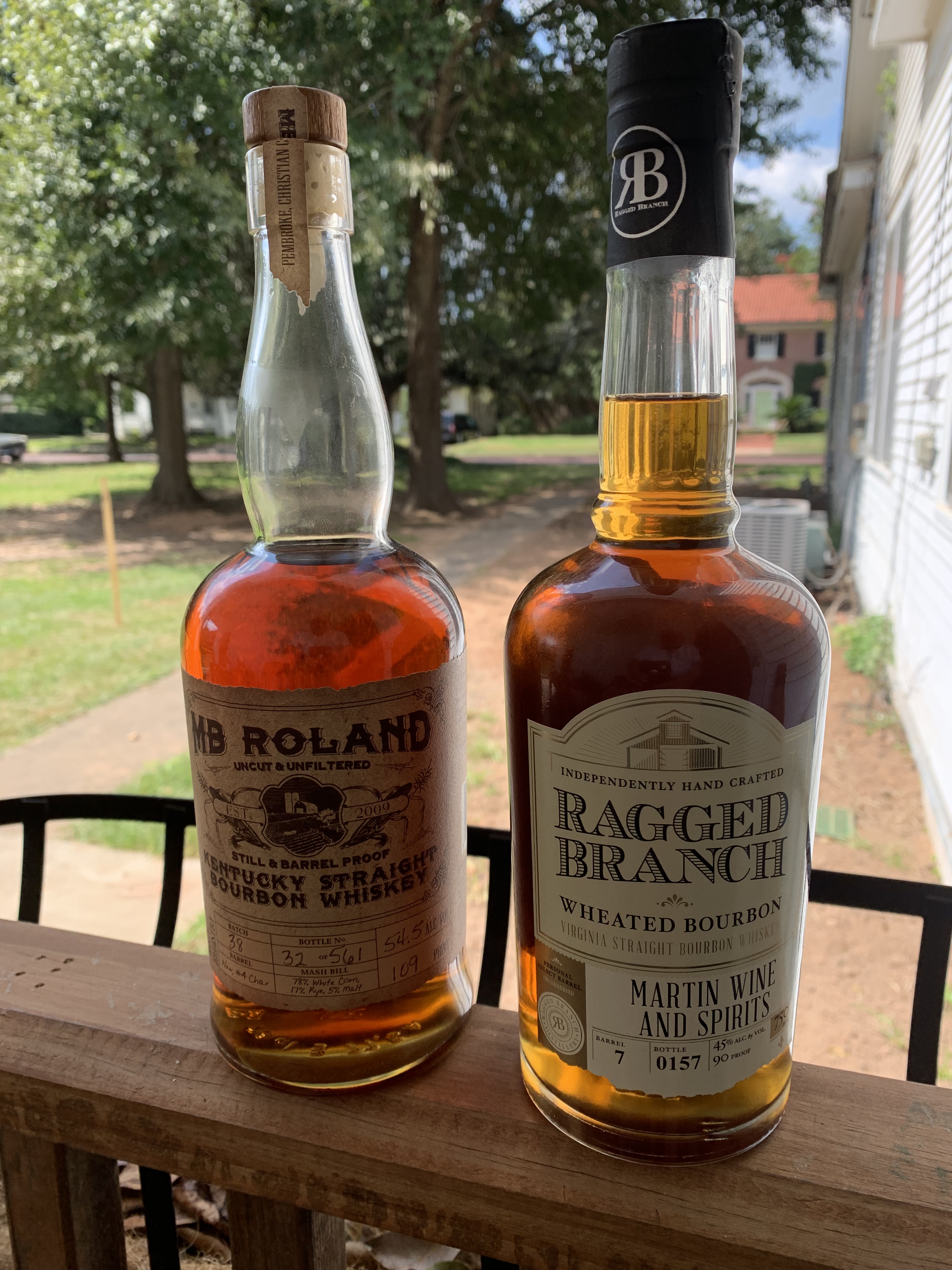 When my drinking buddy Ken Brown was in Illinois, I had him pick up not only the New Riff bottled I reviewed in The Bourbon Future, Part I, but also another intriguing bottle, MB Roland. The story behind this bourbon is that a guy from Louisiana, Roland, joins the military, gets stationed in Kentucky, falls in love with Mary Beth and marries her, and when he retires they buy an Amish Farm and build a still, and the now sell their bourbon uncut and unfiltered made only with grains they grow on their farm. Thus, MB Roland Bourbon was born. But check out the label, up close. I think this is the future of bourbon labeling.

I didn’t have to scour the internet to figure out what was in this; it was all on the label. The downside is that this is only a two year old bourbon.

Despite the lack of years, the color on this is a delightful amber. Very nice, thick, oily legs on the swirl. Before I even nose it or taste it, I know that the underlying spirit is well made. On the nose, I get fruity brandy; maybe armagnac, herbal rye, corn syrup, baking spices. Smells a bit young, but the fruity notes minimize the bitterness of the youth of this bourbon. On the palate, warm notes of brandy mix with baking spices; some lovely malty notes, and slight oak notes. Very nice lingering finish. There is a little youthful bitterness in it, but the other wonderful flavor notes really offset this making this an enjoyable pour. I can’t say enough good things about the mouthfeel of this bourbon; thick and luscious.

Another grain to glass bourbon is Ragged Branch, that has been making a big push into the Louisiana market with its Wheated Bourbon. With Weller products becoming next to impossible to get, Ragged Branch is trying to capitalize on this with advertising on LSU Sports Radio and holding tastings in restaurants, bar, and liquor stores all over Louisiana. There is a limited “Louisiana” edition that Hokus Pokus has, Keife and Co. in New Orleans did a special cask strength release earlier this year, and Martin Wine Cellar in New Orleans recently did a barrel pick. My Dad picked me up one for my birthday. In Louisiana, I have yet to see the standard red label wheated bourbon; only the white label special releases. And they are everywhere.

Like MB Roland, Ragged Branch grows their own grains, but then feeds the spent mash to its cattle and sells the beef – bourbon mash fed cattle! I bet those steaks are delicious.

The Martin Wine Cellar release is the 90 proof version, and the “Cowboy Cut” cask strength version has not yet been released, except, apparently, by Keife and Co.

The color on this is straw colored; perhaps accounting for the mountain climate where this bourbon was aged. But, lovely legs and film on the swirl. On the nose, some slight bitter juniper and floral notes, caramel corn, and just a hair of cinnamon from the barrel. On the palate, it has some of that craft bourbon I am a little young taste, but it is chock a block full of flavor despite being 90 proof; corn syrup, toasted pecan pie with a nice yeasty crust, followed by cinnamon and sugars that goes into the finish. As with the mouthfeel on the Ragged Branch Cask Strength and the MB Roland, I am very impressed with the quality. Ragged Branch definitely has the softer wheated bourbon flavor down without any yeast funk that Larceny has.

One other prediction I made in The Bourbon Future, Part I:

“However, those big producers are going to have competition. And that competition is what will bring my vision of the bourbon future into reality.”

The question is, whether this new competition will be any good?

Well, if New Riff, MB Roland, and Ragged Branch are going to be that competition, I think the answer is a resounding yes. I read (and, indeed, watch on YouTube) a number of reviews of craft bourbon; the almost uniform opinion of myself and other bourbon nerds who make their opinions public is that some of these craft bourbons are good, but most have tremendous foundations and will be great with a few more years of aging.

I predict that in about six to eight years, MB Roland is going to release its older rye recipe bourbon and it will be all the rage and be in great demand with discerning bourbon connoisseurs. I predict in about the same time when Ragged Branch releases a ten year old version of its Wheated Bourbon, bourbon consumers will have an actual choice between Old Rip Van Winkle and Ragged Branch.

I also think Vendome Copper and Brass Works will do a very successful IPO as craft distilling becomes common. In 1900, when Vendome got started, there were over 6000 licensed distilleries in the United States, when this country had a far smaller population. We have about 1,500 now. I think Vendome has about 5000 more stills to build in the near future. When they do the IPO, I am going long on that stock; think of just the future maintenance…

In the next installment of The Bourbon Future series, I will be looking at another area of new competition – contract distilled bourbon. While technically non-distiller producers, they are a different breed, who contract with a distiller to make their own recipes of whiskey, and then age the bourbon in their own barrels and warehouses. They aren’t just buying barrels other folks distilled and aged, and they are adding greatly to the supply of great bourbons out there. I will be reviewing one of those contract distilled but truly great bourbons, and note that I have reviewed a number of great bourbons in that area already. While some folks scoff at the provenance of these whiskies, I do like to point out that when Heaven Hill’s distillery caught on fire in Bardstown, this is precisely what they did to keep their product in the marketplace until they bought a new one in Louisville.  Now, Heaven Hill contract distills for a lot of other people.

I want to take a moment to say that we here at the Whiskey Jar blog are trying to up our game and really move beyond the “hey, I just bought a bottle of whiskey and here is what I think” posts and really try to add something to the dialogue on whiskey and particularly bourbon.

I also want to give a few shout outs. First, to Blake Riber of Bourbonr, for putting my review of Old Grand Dad in his Friday bourbon round up email. Second, to Sean Josephs of Pinhook who reached out to Robb Gibb after his in depth piece on those contract distilled bourbons and ryes currently aging at Castle & Key in Kentucky which we also think points to a great future in bourbon. Third, we want to shout out to Barrell, for linking to our review of their Bourbon Batch 18.

We really want to thank everyone who supports the team’s efforts at the Whiskey Jar, as we enter a new phase.

4 thoughts on “The Bourbon Future, Part II: From Grain To Glass To Long On Vendome”