There is a new “category” on the American whiskey scene, although this stuff has been around for a very long time. It has just never been “named.” This spirit is essentially a bourbon recipe whiskey, with corn being the dominant grain, and it is made in the United States, and presumably the still proof and barrel proof are consistent with bourbon, but that is an assumption. The main difference between this spirit and bourbon is cooperage – the barrels used to age it. For bourbon to be bourbon, it has to be aged in new charred oak barrels. This spirit is aged in used barrels, typically bourbon or rye barrels.

Early Times is probably the oldest brand of whiskey of this type. This whiskey was modestly labeled as Kentucky Whiskey. Something in my generation college kids drank. At one point it was one of the most popular whiskies in the country. Now, it is pretty much relegated to bottom shelf swill, although Brown Forman has released some Early Times bourbons in this country, and Early Times has been marketed outside of the Untied States as a bourbon.

Moreover, the TTB, which regulates the spirits industry, is going to be clamping down on what whiskies can claim the bourbon moniker in 2019. So, I think this category of whiskey, which is basically a lot like bourbon but doesn’t meet the technical specifications for bourbon, is going to be a growing segment in the spirits marketplace. There is going to be more of this sort of whiskey.

So, I have decided on a name for this style of whiskey. If certain bourbon experts and writers are to be believed, bourbon whiskey was not so much named for Bourbon county in Kentucky but for the street where so much of this whiskey was and is consumed in New Orleans, then perhaps the name of the street that Bourbon Street becomes on the other side of Canal Street should be the name – Carondolet Whiskey.

In any event, my Dad was scouting for bourbon for me at Martin Wine Cellar in New Orleans last month, and said they had a store pic of the Old Scout American Whiskey. I was intrigued because Old Scout American Whiskey is typically a blend of actual bourbon and whiskey aged in used but rejuvenated bourbon barrels. Assuming this is a single barrel, I think this bottling is just the whiskey aged in the used barrels. 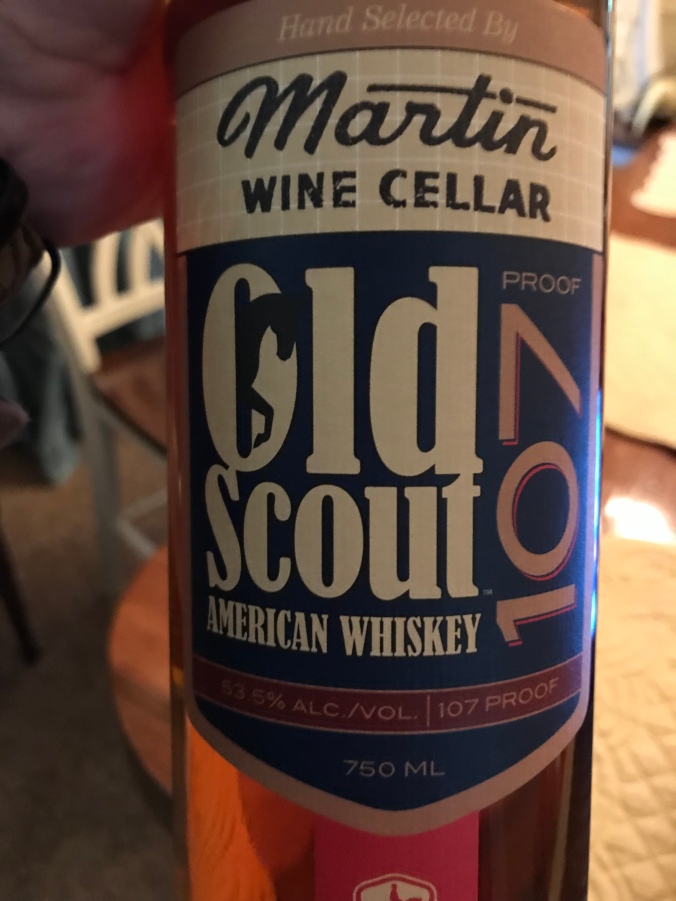 Assuming I am correct on that, Smooth Ambler is buying Carondolet Whiskey from MGP, just as Barrell is doing for its Barrell Whiskey releases. Or, this could be Cascade Hollow juice which Barrell also uses. At 107 proof, this should be a pretty stout whiskey.

The nose on this is very nice. Corn sweetness, a little vanilla, some rye spice. A fairly traditional bourbon nose, even if slightly lighter in tone. On the swirl, beautiful oily long legs. The color is straw like; slightly darker than most scotches.

On the palate is corn sweetness and heavy butter, followed by slight vanilla and the followed up with candied peanuts. Like someone dumped candied peanuts into heavily buttered popcorn because of the scary part of the movie. My thinking is this is probably Cascade Hollow/Dickel juice, but very young unfortunately. Finish is long on rye spice.

I am not loving this, and according to Mike Bonin who contributes behind the scenes for this blog, I have an overly forgiving palate. So, Mike would read my tasting notes and avoid this like the plague. The candied peanut note is pretty off putting; and even the movie theatre butter is a bit much. Then again, given my past experiences with Smooth Ambler, particularly Contradiction and Yearling, this flavor profile is apparently something they are going after. The MGP bourbon they sold under the Old Scout name originally was outstanding. Their other stuff, not so much.

I am going to let this sit for a couple of months; some air helped Contradiction, maybe it will help this Carondolet whiskey as well.

As demand for bourbon continues to soar, there is going to be more and more Carondolet whiskey in the marketplace. I love the Barrell Whiskies, but the ones I have tried have been finished in other barrels. If Old Scout American Whiskey is where this category is going without secondary finishing, Carondolet whiskey will be a pass for me.

However, I did just recently pick up the latest in the Barrell Whiskey series, Dovetail. I will be reviewing that shortly, and hopefully its multiple barrel finishes blended together will redeem Carondolet whiskey for me.