Every fall, Four Roses releases a limited edition barrel strength small batch bourbon. Last year’s Al Young edition got rave views from me and many others. This year’s batch tends to focus on the moral floral yeast strains Four Roses uses, specifically the F and V yeasts. However, they threw in some 16 year old OESK, which is the low rye spicy yeast bourbon which is knock your socks off good.

This bourbon is barrel strength but a relatively low proof, 108.4, due to the fact that Four Roses rickhouses are single story and they seem to lose less water and more alcohol due to evaporation, which is different from most distilleries.

Oddly compared to other releases the bottle does not disclose the mashbills used in the Bourbon. However, the release notes from the distillery indicate there is 13 year old OBSF, 10 year old OBSV, 14 year old OESV, and 16 year old OESK. So, call this a ten year old bourbon, but with a lot of older barrels in it. 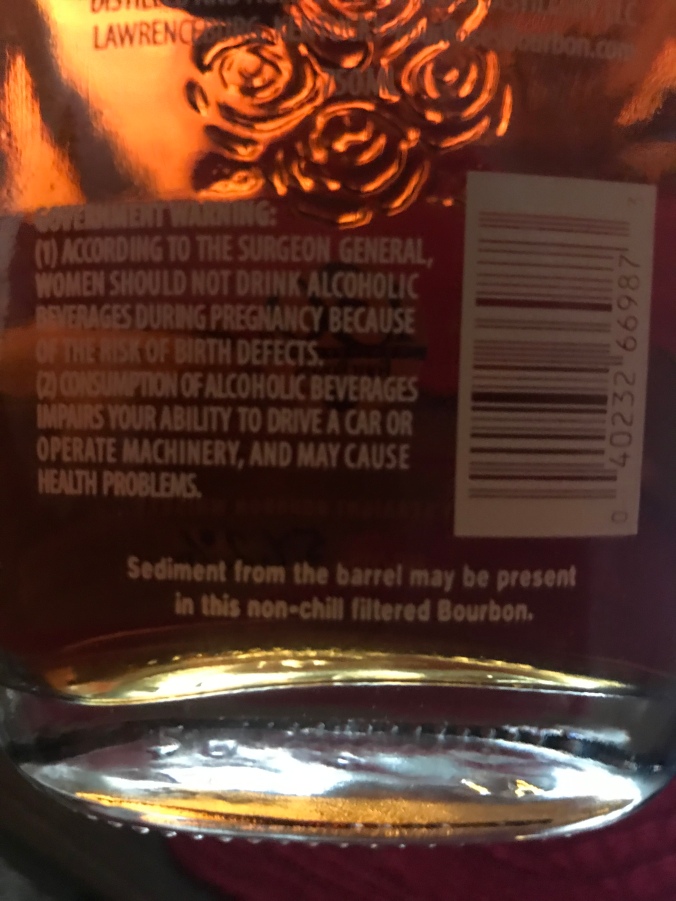 I love the warning label though, stating there may be sediment in the bottle since the whiskey is non-chill filtered. For me, this is a feature and not a bug.

The color on the whiskey is amber with very slight red tones. Long legs with a film. The nose is absolutely intriguing. Sweet, slightly nutty, slight cherry note followed by citrus fruits, white cake frosting. On the palate is an explosion of flavors, caramel chews, dark chocolate, hazelnut, cinnamon, dark fruits, vanilla cream, a slight leather note with a hint, but just a hint, of anise. Mouthfeel is medium bodied but lovely. Finish is oak and cinnamon that turns to a slight herbal tea note. This whiskey has a whole lot going on. It’s like afternoon tea with many sweet things to eat. Really really nice. I think the slight herbal note may be off-putting to some Four Roses drinkers, as this is the first time I have picked up such a note in a Four Roses bottling. 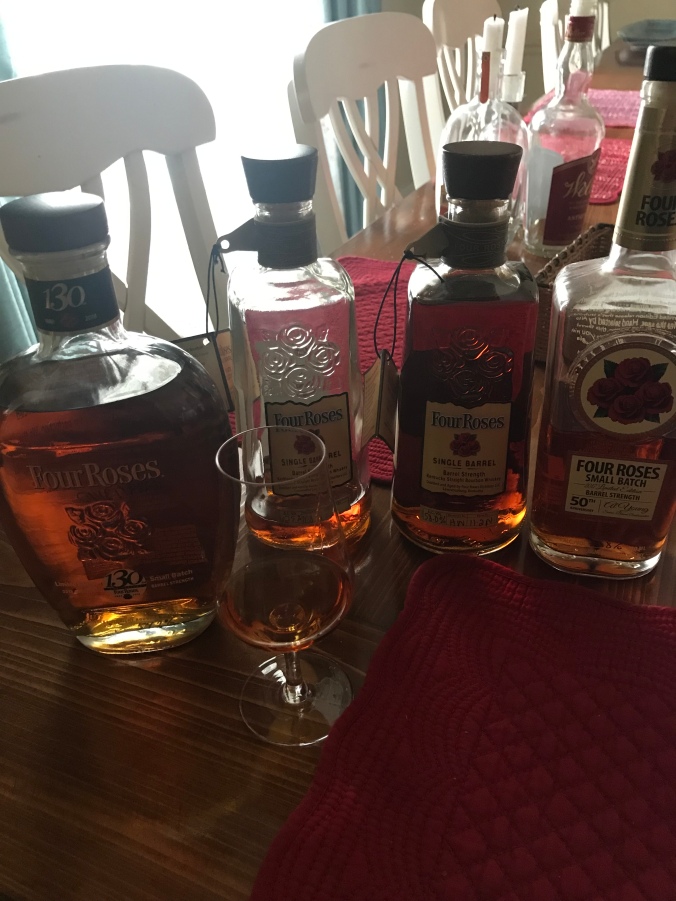 Lucky me, I am going to revisit my other Four Roses cask strength bourbons in my collection that I have reviewed previously to see which I prefer.

2017 Al Young release – This really exemplifies the Four Roses profile in the nose. The palate is less complex than the 130th anniversary but what it lacks in complexity if makes up for in mouthfeel and really has an exemplary taste. Beautiful desserty finish. The funny thing is the Al Young has a lot of the same recipes in it as the 130th, dominated by V yeast, Not sure where the herbal stuff came from in the 130th; I can’t imagine it was the OESK. But, that’s the fun thing about bourbon. Yes, there are mashbills and warehouse locations and barrel char, but sometimes stuff just happens.

OESQ 8 years 7 months – higher proof and darker despite its young age, I imagine this barrel was by a window in the rickhouse. Palate is extremely subtle but delicious; lovely little alcohol burn on this 125 proof bourbon. Very similar to the 130 with an herbal note as well, but it is more slight than in the 130.

OESK 10 years 1 month – The Hokus Pokus Barrel Pick this year was nothing short of outstanding. The mouthfeel is so velvety that it really stands above all the others in that department. Lovely corn sweetness followed by cinnamon and oak that just won’t quit. I’ve been through four bottles, gave away 3, and have two left. I am very sad about having only two bottles of this left, and I opened one of them just for this blog post. This is so sad. I once had it all when I had six bottles of this amazing bourbon. I felt free just to sip on it whenever I liked. Life was so good then. But no more. Ok, so I am being overly dramatic.

The verdict? The Al Young is really a special bottle. I think I like it better than the 130, but I don’t regret buying the 130 at all. The 130 is really a challenge to the palate. The OESK from Hokus is a bottle of awesome but it is really less complex in flavor than the others; but it outshines them all on mouthfeel. The OESQ with the high proof is awesome in its own right. While Al Young is probably the best bottle of the group, you should never pass up an opportunity o buy any cask strength releases from Four Roses. But if you want a really complex bourbon that challenges the palate because of so many different flavors being present, the 130 is a must buy.