Bourbon made outside of Kentucky is like Salsa made in New York City to some. Get a rope. However, Indiana and Tennessee make some great bourbons. Texas is starting to get in the act, although I haven’t fallen in love with one yet.

This bottle of Yellow Rose’s Distilling’s Outlaw Bourbon is just too funny. It is made in pot stills at Houston’s oldest legal distillery, which is like being the world’s tallest midget. Not even straight bourbon, it is guaranteed to be aged for at least a year in smaller than usual oak barrels. Essentially, between Houston’s heat, humidity, and the smaller barrels they are trying to accelerate the bourbon aging process. Made from 100% corn; no flavoring grains like wheat or rye and no barley malt added to aid fermentation. 92 proof.

At this point I am not so much worried about whether it is good but whether I will go blind after drinking it. 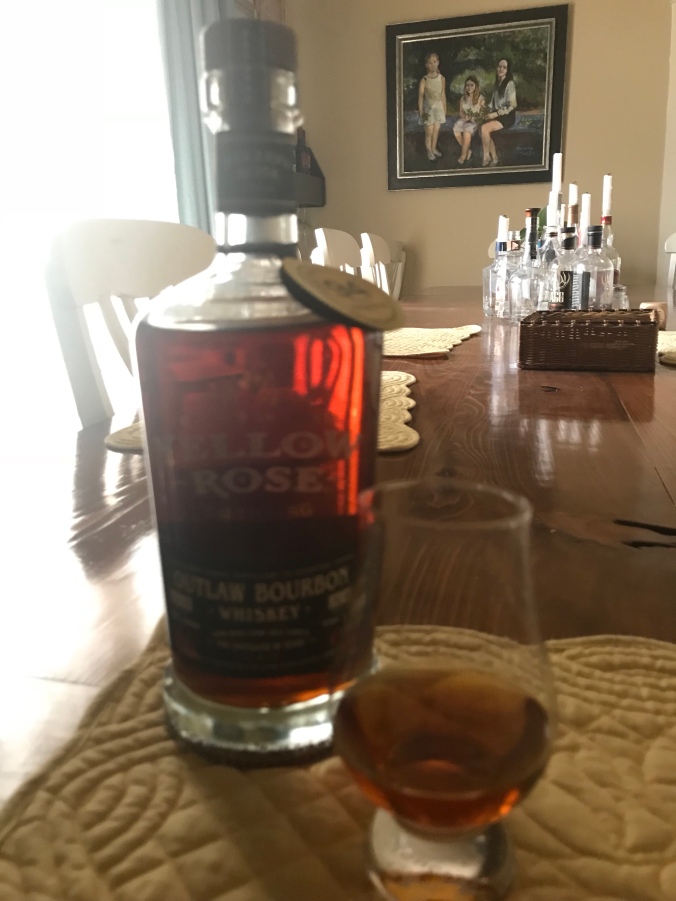 Color is amazingly dark after so little time aging. It even has some mahogany in it. I think they added some color. Nose is rather inoffensive; decent traditional bourbon nose but slightly medicinal and herbal. The palate is actually not too bad. Tastes very much like Tennessee whiskey with an extremely low rye mashbill. Slightly medicinal but not as bad as Uncle Nearest and some craft bourbons I have had. Very decent mouthfeel and finish.

I am blown away, not because this is great stuff but because it only took them a year to make it. It tastes like four to five years old. If the medicinal taste didn’t override the vanilla and caramel, it would be pretty good. Lord knows I have had worse whiskey.

I’m not blind yet either.

This bottle might be fun for a Texas or old west themed party. And if I am in Houston in the near term I will drop by the distillery.