Maker’s Mark was a bourbon I discovered in college. It was something you would occasionally splurge on. When I was in college they celebrated their 100th Anniversary and put out a 100 proof bourbon with a gold wax seal. However, given that Maker’s only really got its start in 1953, I’m not sure to this day what the 100th anniversary business was all about. But I do remember that higher proof Maker’s being really good to my uneducated palate at the time.

Now, the Samuels family, who founded Maker’s Mark, has been in the bourbon business a long time. Thus the S IV Mark; the founder of Maker’s Mark, Bill Samuels, Sr., believed he was the fourth generation of the Samuel’s family in Kentucky. Turns out he was the sixth generation distiller, but at the point where he discovered this fact the mark was so well known they weren’t going to change it. Bill Sr. threw out the old family recipe for bourbon that used rye as the primary small grain and went with red winter wheat when he bought and reopened the distillery, the old Burks distillery at Star Hill Farm, and his wife came up with the trademark, the label, and the dipping of each bottle in red wax.

Maker’s has two primary products; a six and a half year old bourbon, and Maker’s 46, which is aged for a little bit longer, a slightly higher proof, and they finish the bourbon with French oak staves. This technically means that it is no longer bourbon. Recently, Maker’s has now put out a cask strength version of their bourbon, and are doing custom cask strength bottlings of Maker’s 46.

Maker’s Mark, like their colleagues up the road at Heaven Hill in Bardstown, KY, rotate the barrels in their rickhouses for more uniform flavor. Most other distilleries are set it and forget it and we will blend various barrels together for consistent taste; however, that enables those distillers to put out honey barrels; small batches and single barrels of really great bourbon. Not so with Maker’s Mark. There aren’t limited releases from them generally on the market.

Maker’s Mark is now owned by Beam Suntory, but a Samuels is still at the helm of the company; Rob Samuels is now the CEO. He is pushing Maker’s new creativity. The Private Select Program is at the forefront of that effort. 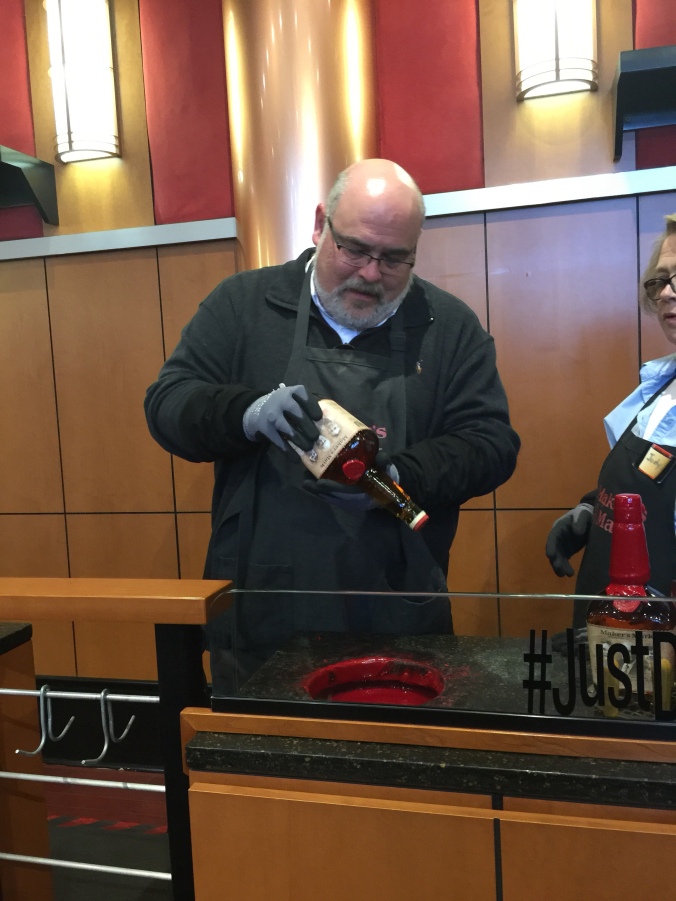 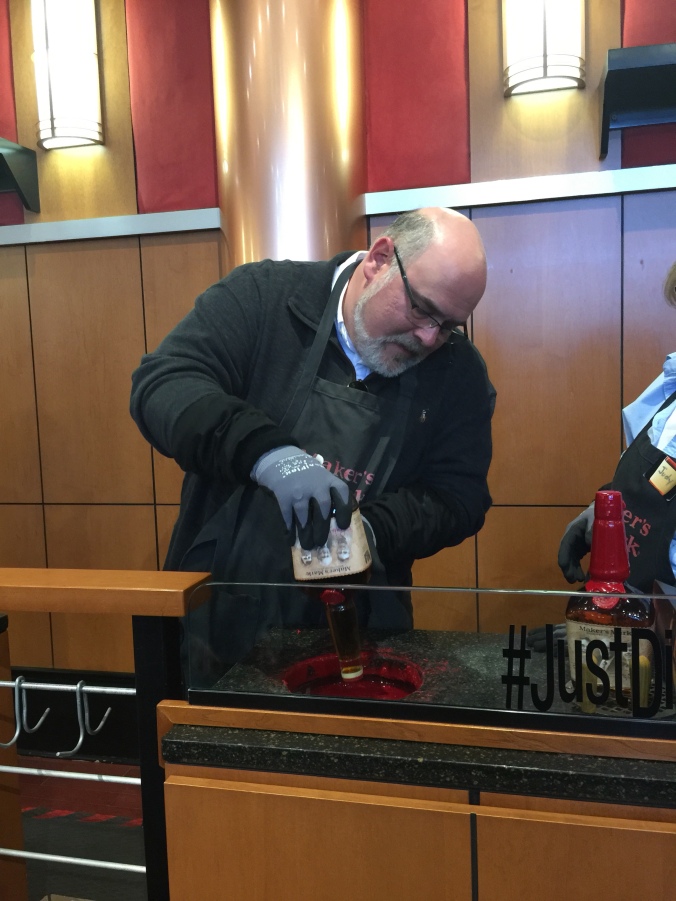 It’s definitely worth it to make the trip to Star Hill Farm to tour the distillery. The coolest part was buying a signed bottle to dip in red wax yourself at the gift shop. The distillery is really off the beaten path, including some very small barely two lane roads. Very pretty place though, and they have a bar on premises. However, as my palate has changed over the years, I am really not that much of a Maker’s Mark fan. When I see Maker’s at a bar as the only bourbon at the many social functions I attend, I am very underwhelmed. I generally feel that there are so many better bourbons out there in that same price range. I am almost always asking why they couldn’t have bought Buffalo Trace, E.H. Taylor Small Batch, Eagle Rare, Knob Creek, or Woodford Reserve.

My dad bought a bottle of Maker’s 46 for his house and I tried some over there. It was better than regular Maker’s but, for me, was nothing to really write home, or, at least, this blog, about. Another friend of mine had picked up some cask strength Maker’s Mark and invited me over to try it. I was pretty underwhelmed with it. Not a lot of oak on it, rather one dimensional. I have seen it since in liquor stores and not bought it.

Recently a friend of mine sent me a link to a bottle of Maker’s Mark Private Select, from a barrel purchased by Bounty Hunter, a California Wine and Spirits outfit that will search and find rare bottlings of wine and spirits. I am always intrigued by new things, and this version of Maker’s 46 is cask strength, with baked American Oak staves, French Cuvée staves, and standard Maker’s 46 french oak staves. I called them up and ordered a bottle which arrived by FedEx. I decided to give Maker’s another shot to impress me. Maybe with Generation X taking over, maybe something different will happen. 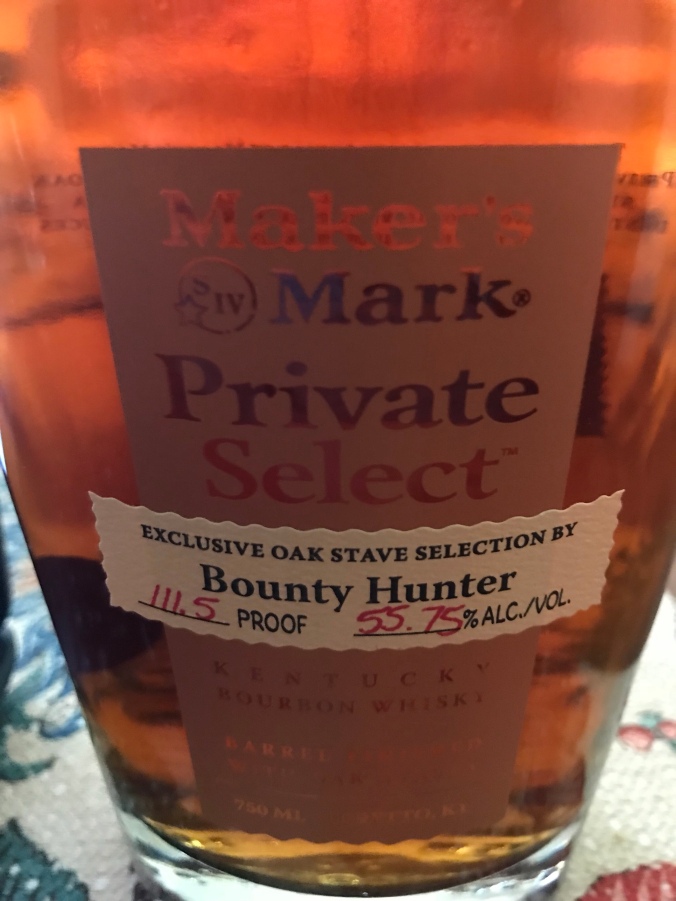 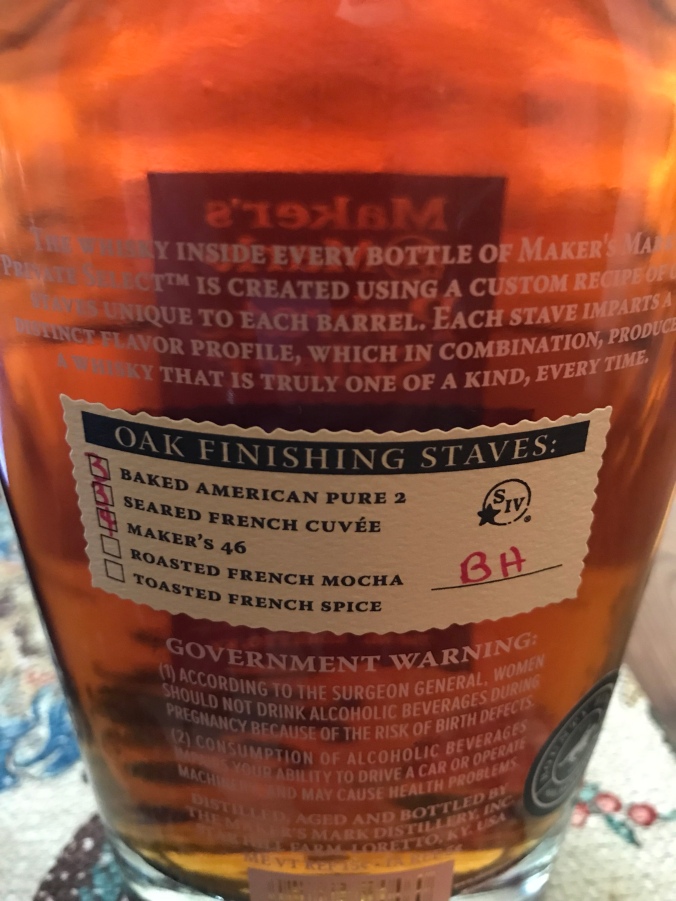 The color of the whisky is a normal bourbon amber color; clearly not extra aged and probably just close to seven years. The added staves were obviously not heavily charred either. 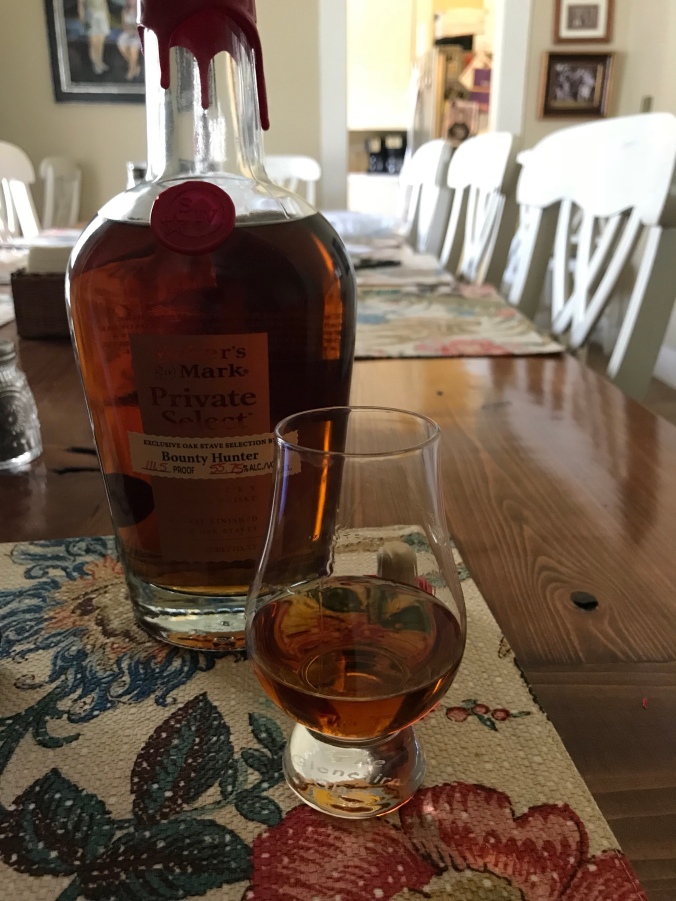 The nose is very delicate and complex. Oak, but not in a bold way like you would find in George T. Stagg or Woodford Double Oaked. The palate is thick and luscious, unlike regular Maker’s or even the cask strength Maker’s. This is a wonderful oak spice explosion in my mouth; sometimes it is very much bourbon and at other times it is very brandy like. The finish is long and fiery at the end, however, its not alcohol burn since this isn’t giving me a major Kentucky hug, but it’s cinnamon and oak. The whole thing makes me think of a the sinful Crispy Creme bread pudding at Walk On’s Restaurant, except they made with cinnamon rolls and then added cinnamon to the bourbon sauce on top. Yet the cinnamon taste is such a far cry from Fireball; it’s so much more elegant somehow. I still can’t get past the mouthfeel; Maker’s is usually kind of thin to medium bodied. This whisky is so creamy, it makes me wonder why Maker’s hasn’t used their know how to make more of their products of this level of quality. I had my wife Catherine try it; she agreed this was really good; buttery, with lots of spice. Very well done.

Maker’s Mark, you finally impressed me. I hope Rob will maybe let some of his barrels age beyond ten years and just see what happens. But finishing the bourbon with different staves is clearly a move in the right direction. I realize that Maker’s recently toyed with lowering the proof on their bourbon to increase supply, and after a large hew and cry from the bourbon world they backed off of those plans. So I get that supplies are tight. But regular Maker’s Mark is really kind of a starter bourbon; rather inoffensive but not great. Sazerac, Heaven Hill, Beam, and Brown Forman all see where the bourbon market is headed; thus the dramatic increase in new, more flavorful, limited release products. Maker’s is behind the curve but this is a good start, but I really want to see what a ten, or twelve, or fifteen year old Maker’s could be, particularly at high proof. Given that it is wheat recipe bourbon, it could be the next Pappy.